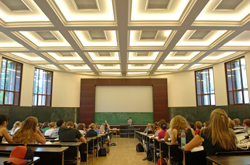 A new high-tech learning tool is becoming more popular on college campuses across the country. The device, called a clicker or "personal response device", is used by some two million college students, reported The Philadelphia Inquirer. Although the tool is utilized primarily by college students, many elementary schools in the Dallas area have begun using it as well, said The Dallas Morning News.

According to The Philadelphia Inquirer, the electronic device is about the size of a small calculator and brings the classroom to life by allowing educators to poll student opinion during lectures and administer quizzes. Professors have raved about how the device helps keep students engaged during class. Samuel Hodge Jr., law professor at Temple University, said, "Not only do [students] want to be educated, they want to be entertained". Hodge started using clickers more than five years ago to hold "the elusive attention of the college student".

On the first day of class, Temple University freshman Sarah Speicher walked into a large lecture hall for Hodge's class. The class started with a question on a big screen: "What year in school are you?" with five multiple-choice options. Students clicked away as a small counter at the top of the screen tracked responses. Within seconds, Hodge, and the rest of the class, had learned that 66 percent were freshmen.

Back in the day when professors stood in front of large lecture halls and presented a question, there was no real way for students to give answers or only a few in the front rows would yell something out. With clickers, however, everyone can participate. "Clickers allow me to teach in pseudo-Socratic dialogue. I ask [students] something, and they are pushed to respond," said Hodge.

According to The Philadelphia Inquirer, the clicker benefits both teacher and student. With the device, teachers are able to keep students engaged and because of its immediate results, they know what areas students need more help on. "Misconceptions are being cleared up immediately rather than later," explained Hodge.

Furthermore, students, who may be too shy to talk in front of a large lecture hall, are more likely to participate during class. "It can be very intimidating in front of 400 people to raise your hand and answer the question. There is a security in anonymity," said Hodge. Students also have a lot more fun during class, which seems to boost performance. Inside Higher Ed reported that at John Hopkins University, one biology lecturer saw class attendance increase by about 30 percent after he started using clickers. Students' grades went up as well.

While most students seem to like to the device, a recent decision at John Hopkins University has revealed that some students would prefer to go without it. Recently, the school passed the cost of enrollment codes on to the student. During its clicker pilot program, the university covered the cost of the per-student enrollment, but now that more than half of the university's undergraduates use the device, the university is requiring students enrolled in clicker-courses to pay $13 per course, per semester or a one-time fee of $35 that covers all courses, all semesters to register clickers. Students are already required to purchase the device, which Inside Higher Ed stated usually costs between $20 and $30.

Some students do not mind the fee, but others are outraged. "It's a useless service anyway. It doesn't better my education. Yet, I had to buy the device...Such a waste of money," complained Adam Zeldin on a Facebook page devoted to protesting the new fee. Katherine Weiling Tan, sophomore and creator of the Facebook page, said in a message that at the end of class, most students do not ask the professor a question about lecture, but rather complain that their clickers were not working.

According to Inside Higher Ed, nearly 200 students oppose the new fee.

"Take Your Fee and Click It!" insidehigered.com, September 24, 2010, Steve Kolowich