College Athletes are Not Faring Well in the Classroom 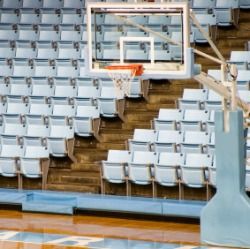 University of North Carolina Chapel Hill Tarheel fans know student athletes can accomplish amazing things on the field or court -- and can earn a good deal of money for the institution. A UNC education specialist warns those same students might not be faring as well in the classroom, however, and, in some cases, can barely even read. A new analysis from CNN suggests the phenomenon is nothing new for college athletes, and is more widespread than some might realize.

UNC education specialist Mary Willingham has come forward with an analysis suggesting that more than half of UNC-Chapel Hill's academically at-risk student athletes read at an elementary or middle school level, and that about 10 percent can hardly read at all. The News & Observer reports that Willingham -- who remains employed by UNC, but no longer works with athletes -- analyzed 183 athletes admitted to UNC between 2004 and 2012. She has long criticized the university for allegedly changing student grades and forgiving absences in an effort to keep athletes eligible, so says that while she finds the results heartbreaking, she is not surprised by them.

"How can you take someone who's got fourth-, fifth-, sixth-grade reading levels, enroll them in 12 hours of college curriculum and expect them to be able to pass those classes while you're trying to do some remedial work with them to catch all those missing years up?" Willingham said. "It's fraudulent. It's impossible. You've got to have a system of cheating in place."

UNC-CH disputes Willigham's report in a statement acquired by ESPN.

"We do not believe that claim and find it patently unfair to the many student-athletes who have worked hard in the classroom and on the court and represented our University with distinction," the statement said. "Our students have earned their place at Carolina and we respect what they bring to the University both academically and athletically."

UNC professor and faculty athletic representative Lissa Lampkin Broom told ESPN that while Willingham had shared her findings with the institution previously, she never supplied the school with the data from which she drew her conclusions.

"If Mary's data uncovers issues that would be helpful to us in our admissions process or in our academic support process, then I want to know about those so we can benefit from whatever work she has done… in moving forward and doing things better," said Broome.

The story of high performing athletes underachieving in the classroom is neither new, nor unique to UNC. A recent CNN analysis of academic data from 21 participating public universities reveals there are many student athletes who cannot read beyond an eighth-grade level. NCAA officials contend that though there are probably some troubling cases, most athletes compete at a high level in the classroom.

"Are there students coming to college underprepared? Sure. They are not just student-athletes," Kevin Lennon, vice president of academic and membership affairs at the NCAA, told CNN. Nonetheless, he says it is up the colleges -- not the NCAA -- to ensure students are keeping up academically, and that schools prefer it that way. "(Universities) don't want a national standard that says who they can recruit and admit. They want those decisions with the president, provost and athletic directors," he said. "That is the critical piece of all of this."

Willingham told the News & Observer that her report has garnered her a number "nasty" emails and even death threats. Still, she said she is optimistic about change, and that she has already small improvements. Some members of Congress have also proposed reforms she finds promising.