College Board Report Shows SAT Scores Declined For Class Of 2011 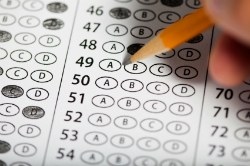 Data released yesterday by the College Board indicated that SAT scores for the graduating class of 2011 dropped in all three subject areas--reading, writing and math.

The College Board reported that a total of about 1.65 million students from the graduating class of 2011 took the exam, but only 43 percent of students scored at least a 1550 out of 2400--the benchmark that indicates they are ready to succeed in college.

"At the precise time the importance of a college degree is increasing, the ability of the U.S. to compete in a global economy is decreasing," noted Jim Montoya, vice president of the College Board, who was quoted by The Wall Street Journal. "We, as a nation, have to do a better job preparing our kids for college."

College Board officials explained that the lower scores likely reflect the increased representation of students from various economic, ethnic and academic backgrounds. This year, 44 percent of students who took the exam were minority students, 36 percent were the first in their families to attend college and 27 percent did not speak English exclusively.

"We've made great strides in the past five or 10 years in increasing access," said Wayne Camara, vice president of research and development for the College Board, who was quoted by the Los Angeles Times. "As we reach more students who have less resources, scores will tend to drop."

The College Board's press release also noted that there were "more high-performing students among the class of 2011 than ever before."

Strauss cited figures quoted by Bob Schaeffer, public education director of FairTest, the National Center for Fair & Open Testing, a group which opposes standardized tests such as the SAT: From 2002 to 2003, the number of students who took the SAT increased by 5 percent--much larger than the 3 percent increase from 2010 to 2011. But at the time, average test scores for verbal and math increased by six points. (The writing section didn't exist at the time.) Furthermore, the critical reading scores in 1972 were 530, while today they are down to 514. If the College Board's explanation of falling scores is correct, wrote Strauss, then these things should not have happened.

"How many wake-up calls do policy makers need before they admit that their test-and-punish strategy is a failure?" said Schaeffer, who was quoted by The New York Times.