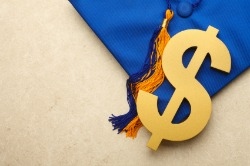 A report by The College Board showed that college tuition climbed by more than 4 percent at four-year public and private nonprofit colleges during the 2012-13 year, but that these increases were smaller than in years prior. The annual survey of nearly 4,000 schools also revealed that the published price of tuition grew slightly more at public than private institutions, by 4.8 percent compared to 4.2 percent, according to Inside Higher Ed.

The difference in tuition increases at public versus private colleges has been noticeable since the early 1980s, noted Inside Higher Ed. From that time onward, the costs for public four-year schools rose at a slightly higher rate than those for private four-year schools. When looking solely at the past decade, this trend continues. Counting tuition, fees, room and board, the price tag for public four-year colleges grew by 3.8 percent over the decade, as opposed to 2.3 percent for private schools.

This trend could be partly due to cuts that states may have made to deal with the impacts of the recession. Many states decreased their higher education funding, resulting in higher tuition prices. The New York Times reported that these increases have been rather sharp for public schools during the past three years. At the same time, financial aid to students may have helped to offset them.

The Chronicle of Higher Education showed that when adjusting for grants (such as the Pell Grant) and tax benefits, students at in-state colleges paid an average of $2,910 in 2012-13 and those attending private, nonprofit four-year schools paid $13,380. As for the hard, unadjusted numbers, the average list or sticker price of in-state public tuition reached $8,655 in 2012-13, up from $8,256 the year prior. Private four-year schools saw their average list price climb to $29,056 from $27,883 the year prior. However, the report emphasized the importance of looking at the net price of college -- the cost of college after grants and tax credits -- to obtain a more realistic picture.

"Certainly ignoring the sticker price would be wrong," Sandy Baum, a co-author of the report, commented during a press conference, according to The New York Times. "But we cannot understand college affordability without looking at net prices."

One concern is that federal aid for students may begin to taper off or be cut in the future, according to Inside Higher Ed. If these decreases do occur, students could accrue higher debt levels or opt to forgo college. These outcomes could be especially likely if states don't begin to put funding back into higher education and help keep tuition costs in check.

Students looking for alternatives could consider community college. The New York Times reported that these schools did show an overall uptick in tuition, but the costs to students were outweighed by increased financial aid. Overall, the net price of community college is now lower, on average, than it was during the past decade and the 1990s.

The College Board report may be hard to simplify down to a few data points because trends change over time and outliers also can have an effect. For example, the 8.4 percent tuition hike for public four-year schools last year was largely due to state budget issues in California, noted The Chronicle of Higher Education.

"All of the trends we're talking about are more complicated than the simple one-liners would suggest," The Times quoted Baum as saying.