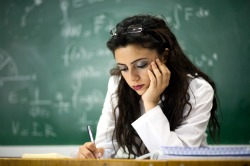 Promising a voluminous reading list, difficult subject matter and a high pressure test at the end of the term, an Advanced Placement course is oftentimes a daunting task for students to complete.

And yet, millions of high school students across the country opt to enroll in A.P. classes every year, looking to beef up their resumes before applying to college. The A.P. test has become increasingly popular as of late, with some 1.8 million students taking 3.2 millions tests in more than 30 different subjects, The New York Times reported.

"It's getting to the point when you don't see AP courses on a student's resume, you wonder why," Bill Brown, vice president of enrollment at Lebanon Valley College, told The Patriot-News.

The A.P. test is not without its criticisms, however. Although the test allows ambitious students to earn college level credit and learn challenging material, many educators say the sheer breadth of some A.P courses is unrealistic, The New York Times noted.

"Some of the students look at the book and say, 'My gosh, it's just like an encyclopedia,'" said Joan Carlson, a high school biology teacher in Worcester, MA. She says when new A.P. teachers encounter it, "they almost want to start sobbing."

In response to concerns that the tests can be improved, the College Board, the nonprofit organization that owns the A.P. exams as well as the SAT, announced it will release a revamping of the A.P. biology and United States history tests. In particular, the board will significantly cut down the amount of material students need to know for the test and provide, for the first time, a curriculum framework for what the courses should look like.

"We really believe that the New A.P. needs to be anchored in a curriculum that focuses on what students need to be able to do with their knowledge," said Trevor Packer, the College Board's vice president for Advanced Placement. A.P. teachers said that a shift would be impossible unless the breadth of material covered was scaled back.

The new A.P. biology exam, to be unveiled in 2013, will require less memorization and more conceptual thinking. Board members plan to cut the number of multiple choice questions in half, make the use of calculators required and double the number of free response questions.

Some officials, on the other hand, claim that taking A.P. classes is not the most beneficial way to prepare for the rigors of college, the Orlando Sentinel reported. According to a report by ENLACE Florida, which advocates for college access for underrepresented students, dual enrollment classes at community or state colleges may do more to help students than A.P. courses. The report's analysis revealed that dual enrollment courses are less expensive and tend to better prepare high school students for standardized tests like the ACT and SAT.