College Board Study Examines The Value Of A College Degree 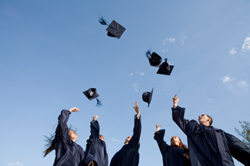 According to the College Board's third edition of "Education Pays: The Benefits of Higher Education for Individuals and Society", evidence shows that, despite rising tuition, a college degree still pays off.

The report "documents the returns both individual students and society as a whole receive from investments in higher education". According to the authors, students who pursue postsecondary education obtain not only financial benefits, but also personal and lifelong benefits.

According to the authors, the benefits are not just financial. The Chronicle of Higher Education pointed out the data showed a correlation between earning a college degree and other positive outcomes--for example, college graduates are more likely to vote, volunteer, exercise and are less likely to smoke or be obese. While the report focused on correlations, other research has shown that education is, indeed, one cause for these behaviors, said Baum.

Despite the data, many argued it is not so easy to determine what a college degree is really worth. Charles Miller, former chairman of the federal Commission on the Future of Higher Education, criticized the second edition of "Education Pays", saying the report was flawed, based on assumptions and inflated the benefits of a degree. Richard Vedder, director of the Center for College Affordability and Productivity agreed, saying, "The College Board is not in the business of turning people away from college."

Anthony P. Carnevale, director of the Georgetown University Center on Education and the Workforce, was particularly critical of the non-financial benefits. "When you stand on the stage and they give you the degree, how do you become healthier? Was it because you walked up the stairs?" he asked.

Nonetheless, Baum said the report is not about advocacy. "Our goal is not to be convincing people of something so much as it is to provide solid information to which people can refer in order to reach conclusions that are based not on anecdotes but on evidence," she told Inside Higher Ed.

Robert Lerman, an economics professor at American University cautioned against reading too much into the report. "In general, college is a good investment, but there is great variability in outcomes," he said in The New York Times.

"Education Pays, but How Much?" chronicle.com, September 21, 2010, Beckie Supiano

"Education Pays: The Benefits of Higher Education for Individuals and Society," trends.collegeboard.org, 2010