College Board to Revamp the SAT 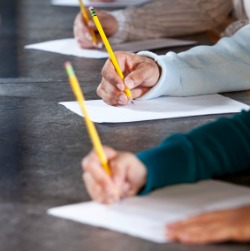 In an effort to better prepare high school students for college, the College Board recently announced it would redesign the SAT.

The Washington Post reported that David Coleman, who became president of the board in October, wrote an email to members saying that the board would improve the exam by focusing more on core knowledge and skills that evidence has shown help prepare students for college and career success. Exact details of the changes were not outlined, nor did Coleman discuss how long the process would take; however, the test will likely become more aligned with the Common Core standards for K through 12 education that Coleman developed prior to his College Board presidency. Coleman’s message also stated that educators would have opportunities to offer ideas and feedback on how to improve the exam. His message implied that the reason behind the change was to maintain the SAT’s relevancy.

“While the SAT is the best standardized measure of college and career readiness currently available, the College Board has a responsibility to the millions of students we serve each year to ensure that our programs are continuously evaluated and enhanced, and most importantly respond to the emerging needs of those we serve,” wrote Coleman in his announcement.

Some speculated that the changes may also be a reaction to the growing number of students taking the ACT rather than the SAT for college admissions. As The Washington Post pointed out, the SAT has had a successful track record of test takers; however, in 2011 the number of ACT test takers surpassed SAT test takers for the first time.

The SAT was overhauled not too long ago, in 2005. At that time, some of the changes included the addition of a written essay, increased test time and the increase of the total possible score to 2400. Many, including Coleman, have criticized the essay portion, arguing that it does not challenge students to analyze a source or make evidence-based arguments, skills that are needed for college coursework.

Some, however, say the change may backfire especially if part of the goal is to increase the number of SAT test takers. As Inside Higher Ed noted, some experts argued that students would feel more comfortable preparing for a test that has been consistent.

“Completely revamping the SAT in less than 10 years from its last makeover may be off-putting to the biggest stakeholders involved—the students,” explained Shaan Patel, director of SAT programs for test prep service Veritas Prep, in Inside Higher Ed.

“An Announcement from College Board President David Coleman Regarding the SAT,” facebook.com, February 26, 2013