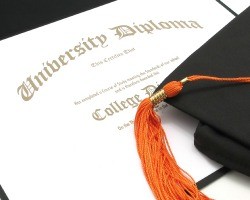 With funding cuts and rising tuition rates, many students are questioning whether those costs are worth earning the degree. A recent study by the Public Policy Institute of California (PPIC) revealed that in the case of California students, the answer to that question is yes.

Hans Johnson, co-director of research at PPIC, commented on the overall benefits of earning a college degree in California, stating, "College is a good investment for the vast majority of students. And it's important to remember that the benefit of a college education is greater than the gains enjoyed by any one person. College graduates contribute enormously to the state's prosperity."

Although there are proven advantages to holding a college degree in California, rising tuition and student loans are becoming more significant counters to those advantages. While only about a third of California's freshmen took out a loan in 2000, almost half of the state's freshmen did so in 2010. The average amount of student loans has also risen sharply. Between 2005 and 2010, the average loan amount for California freshmen rose by 36 percent after accounting for inflation, to a figure of almost $8,000 for the first year of college.

That increase in loans can be partly attributed to tuition hikes at California State University and University of California campuses. The Contra Costa Times noted that the state's public universities suffered $4 billion in funding cuts between the 2001-02 and 2011-12 academic years. Simone Rudolf-Dib, a student at UC Berkeley who currently has $7,000 in student debt, expressed her frustration with the high tuition rate in the San Francisco Chronicle: "When you're paying $12,000 a year in tuition, it kind of defeats the purpose of a public education."

Loan amounts vary depending on the type of college institution that one attends. According to the Contra Costa Times, freshmen at private institutions take out student loans more often and at a greater amount than freshmen at public institutions. Additionally, the majority of students at for-profit California schools often accrue a higher amount of debt than do students at other types of institutions. While first-year students at public, four-year colleges took on an average debt of $5,289 in 2010, their for-profit college counterparts took on an average of $9,189.

For-profit college graduates also earn lower wages than graduates of nonprofit schools, the San Francisco Chronicle revealed -- about $2,000 lower in annual wages. Johnson speculated that the reason behind this wage discrepancy is that "employers value those degrees less than they do those from more traditional universities."

Johnson emphasized the importance of such initiatives in the press release: "California's future depends on substantial increases in college enrollment and graduation. California faces a shortage of 1 million college-educated workers by 2025. Achieving those increases will require new efforts to make college accessible and affordable."

"Despite Rise in Student Debt, College is a Smart Investment for Most," ppic.org, June 3, 2013