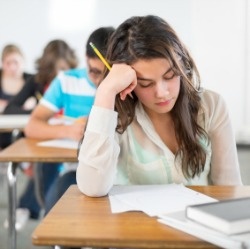 According to a study conducted earlier last year, the college experience may be inadvertently harming women's self-esteem. The study, which was conducted by the Office of Institutional Research, Planning and Assessment at Boston College, surveyed college women twice - during their freshman year and again at graduation - in order to document their level of confidence throughout their college career. Students were asked questions like "What do you think of your academic achievement" and "How would you rate your drive to succeed?" in order to give study administrators a glimpse into their state of mind. And, despite the fact that women had a relatively high level of academic achievement, study results showed that their confidence levels had waned by the time they were ready to graduate from school. Contrastingly, the same study showed that male student's confidence actually increased during the same timeframe, despite the fact that they had lower GPA's over all. So, what gives?

According to those who conducted the study, the conclusions may represent something much bigger than the raw data suggests. "I think it became clear to us when we started having the conversations that it wasn't just an academic thing, it was a cultural thing," Vice President of Planning and Assessment Kelli Armstrong said. "We needed people outside just the academic culture to weigh in." According to CBS Connecticut, faculty members and sociologists believe the disparity between men and women could be a result of the extra pressure that many college women experience. Some of the potential culprits suggested include the pressure for young women to dress or act a certain way, the housing lottery on the school's campus, and the hookup culture that is growing in popularity on college campuses from coast to coast.

Maria Pascucci, the founder of Campus Calm, a national organization that aims to help college women lead healthy, happy lives, believes that female students, in particular, deal with the pressure to feel "perfect," adding that college women focus too much on their physical appearance.

"In our society, being a perfectionist is a glorified and socially acceptable form of self-abuse," Pascucci told USA Today. "When we begin to compare ourselves to others, especially when we're vulnerable, that can do a lot of damage to our self-esteem," she says.

Despite the study's findings, it may be hard to pinpoint exactly why women are struggling to stay confident while succeeding academically. However, many within the Boston College community believe that women should work on embracing their own unique attributes instead of trying to please others or meet an unreasonable standard. Abbey Clark, a senior and founder of the Boston College chapter of I AM THAT GIRL, a female-empowerment community, believes that women should learn to turn self-doubt into self-love. "Girls have a lot to bring to the table," Clark told USA Today, "and that's looking past physical beauty and just celebrating something unique within yourself that isn't so apparent."