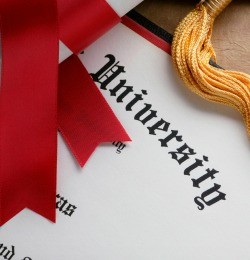 High unemployment rates and rising college tuition costs have led many people to ask if earning a college degree is even worthwhile. According to a recent report released by The Pew Charitable Trusts, the answer to that question is yes.

A recent press release summarized the report's findings, comparing the economic success of 21 to 24-year-old high school and college graduates before, during, and after the recession. Researchers found that a bachelor's degree did provide somewhat of a buffer for recent graduates against unemployment, low-skilled jobs, and lower wages. While employment and wages declined across education levels during the recession, the decline was much worse for individuals with only a high school diploma or associate degree. For example, high school and community college graduates faced employment declines of 16 and 11 percent, respectively, compared to just 7 percent for those with a bachelor's degree.

A wide employment gap between different education levels held even before the recession. According to The Pew Charitable Trusts report, the employment level for 21 to 24-year-olds with just a high school diploma was about 55 percent before December 2007, while approximately 67 percent of associate degree holders and about 69 percent of bachelor's degree holders held jobs during this time. These higher employment levels were not, as the press release pointed out, due to college graduates accepting lower-skilled or lower-waged jobs. Life Inc. further noted that lower employment levels for high school graduates were not a result of their going back to school. After the recession, the employment of individuals holding only a high school diploma dropped to 47 percent, while the employment of associate and bachelor's degree holders dropped to 57 and 65 percent, respectively.

Addressing wage gaps, BBC News explained that although the recession did reduce incomes across the entire job market, a college degree still protected against too significant of a decline. College graduates experienced only a 5 percent decline in income, compared to a 10 percent decline for individuals without a degree. Furthermore, as Life Inc. revealed, even after wage cuts occurred due to the recession, there was still a significant wage gap across varying education levels. While the post-recession average weekly wage for young college graduates was $645, high school graduates of the same age earned only $394 per week. Diana Elliot, manager of Pew's Economic Mobility Project, told Life Inc., "Any amount of education does improve the labor market outcomes for those recent graduates."

Despite the greater economic success of degree-holders, many people believe that a college education does not always pay off. Graduates with high student debt, for example, may have to spend most of their wage on student loan payments. Laurence Kotlikoff, economics professor at Boston University, recommends that college-goers do an assessment of their impending costs and what they plan on studying. "The issue is the cost/benefit analysis of what do you have to give up to get that higher salary? [...] Taking on tons of debt doesn't give you much flexibility. You're stuck having to pay it off and taking maybe something that comes along, no matter how good it is."

While there can be considerable financial costs to obtaining a college education, Elliot has an overall positive view on the matter. She stated in the press release, "Higher education is one of the key factors driving upward mobility in the United States. Even under the pressures of the most recent economic downturn, a four-year college degree provided protection in the labor market for recent college graduates."

"How Much Protection Does a College Degree Afford?" pewstates.org, January 2013