College Degree Is Expensive But For Graduates, Well Worth It 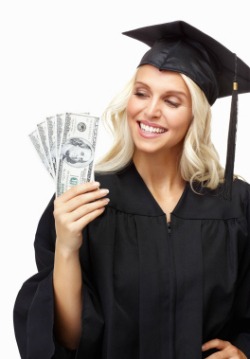 With the price tag for a college education skyrocketing and still a ways to go before the economy fully recovers, it is not surprising that many Americans are questioning whether college is worth it. According to a Pew Research Center study, while most Americans think the U.S. higher education system does not provide students with good value for the money they and their families spend, an overwhelming majority of college graduates felt their education was a good investment.

The Pew Research Center conducted a general public survey March 15-29, 2011 with a nationally representative sample of 2,142 adults ages 18 and older. Responses revealed that 57 percent of Americans said the higher education system does not provide value to students and parents. Moreover, 75 percent felt that college was too expensive and 48 percent said they, in fact, could not afford to go to college. College graduates, however, begged to differ--86 percent said they felt that college was worth it.

For some, a college degree offers monetary payoff as a degree translates to about $20,000 more in earnings per year, reported Reuters. However, with tuition tripling since the 1980s, today's college grads leave school with approximately $23,000 in student debt, on average. Despite the outcome of higher pay and better jobs after graduation, covering the current costs of rising tuition has been difficult for many.

"People are clearly struggling with the high costs of college," said Paul Taylor, one of the study's authors, to CNN.

Evan Bloom, for instance, graduated from the University of California Berkeley in 2007 with a bachelor's degree in architecture, noted The Chronicle of Higher Education. After working in construction management for a few years, Bloom quit his job and co-founded a catering business. Bloom said it was his out-of-classroom experiences at UC Berkeley that not only inspired him but also prepared him to become a restaurateur.

"My classes were great, but it was really everything else I was doing that mattered the most. It was tapping into this whole sphere of influences," said Bloom.

Vanessa Mera, a 2001 graduate from the University of Miami, also felt that college helped her grow on personal level. Mera earned her bachelor's degree in psychology and economics, but as an incoming freshman, she had intended to major in biology and go on to medical school.

"In college, you come in thinking one thing about yourself and you leave thinking in a completely different way," she said.

Mera pointed out that the competitive environment at the University of Miami taught her to put herself out there and helped her overcome her shyness.

"Without those four years, I wouldn't be the businessperson I am today," Mera added.

"Many say college too pricey but grads say worth it: survey," reuters.com, May 16, 2011, Lauren Keiper

"Study looks at whether college is really worth the price," CNN.com, May 16, 2011, Sally Holland

Career and Education News
Home >
News>
College Degree Is Expensive But For Graduates, Well Worth It