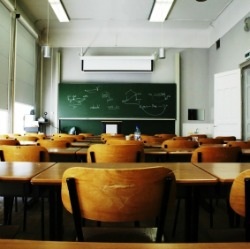 Last week the U.S. Census Bureau released a report revealing that college enrollments declined nationally for the first time since 2006, thanks, perhaps in part, to rising tuition and student debt. While a major bond credit rating firm warns the drop could signal difficult times ahead for U.S. universities, The Deseret News suggests it could actually spell good news for the economy at large.

College enrollment in the United States dropped by nearly a half-million students in 2012, after rising steadily since 2006, reports the U.S. Census. Peter Harkness, senior policy advisor to the Pew Center on the States and founder of "Governing" news magazine, told The Deseret News that soaring tuition -- which has risen 5.4 percent annually above the inflation rate since 2001, per The College Board -- probably contributed.

"Affordability is a serious and growing problem, but it's part of a much larger complex of issues involving how public higher education is supporting itself," said Harkness, who noted that state higher education funding has declined precipitously as of late. Many state's flagship public schools must now operate more as private universities, enrolling larger numbers of wealthy out-of-state students who can afford steeper costs. "That puts a lot more pressure on in-state students who don't have sufficient means," he said.

The Census report prompted Moody's Investors Service to release a special report of its own Monday, reported Reuters. The bond rating firm warned that falling enrollments threaten higher education revenue at a time when colleges are already struggling. Two private and one public college have had their credit downgraded, citing enrollment declines for fall 2013. "Enrollment declines in higher education are credit negative because they heighten competitive pressure for all universities," noted Moody's. "This limits opportunity to grow tuition revenue, now the primary revenue for the majority of public and private universities."

But as threatening as declining enrollments may seem for colleges, some experts suggest they could indicate an improving economy. Terry Hartle, senior vice president of the American Council on Education, told The Deseret News that the decline was much larger among students age 25 and older, which might suggest that more non-traditional students are returning to the workforce.

"When times are tough, Americans go to college or trade school to improve their employability," Hartle said. "There is less need when jobs are more plentiful. Colleges and universities always prefer large enrollment, but this is good news in general, because it reflects a stronger economy."

Another potential bit of good news from the Census report, notes The Wall Street Journal: Though enrollments are declining overall, the collegiate student body is more diverse than ever. Enrollments among Hispanic students rose from 11 percent to 17 percent between 2006 and 2012, achieving a record high. The number of black students also rose, though by a more modest 1 percent.