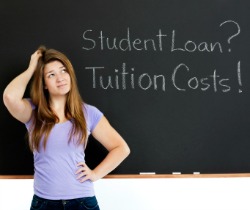 Although the start of an economic recovery is generally seen as good news, it has created the opposite effect for many college campuses across the country. According to The New York Times, college enrollment fell two percent over 2012-2013 with the brunt of the decrease seen at for-profit and community colleges.

The drop in college enrollment has reportedly been caused by the convergence of several issues, some of which are entirely out of the control of colleges and universities. First, the college-age population has dropped after a decade of steady growth. Second, many would-be students may have been lured into the job market due to the increased opportunities created by the economic recovery. And third, some schools fear that students are getting turned off by the high costs of enrollment and the prospect of student loans.

Unfortunately, dips in college enrollment often translate into lost profits for schools. According to David A. Hawkins, the director of public policy and research at the National Association for College Admission Counseling, some schools may even be teetering on the edge of financial disaster.

''There are many institutions that are on the margin, economically, and are very concerned about keeping their doors open if they can't hit their enrollment numbers,'' Hawkins told The New York Times.

In order to lure students back to school, many colleges have resorted to pushing back enrollment deadlines and even calling students to see if they're interested. According to News Max, this could mean good news for students who want to upgrade to a middle-tier school.

"After May 1, I got e-mails from three or four colleges saying, 'We've still got spots, and we're looking for people to fill them,' and I don't remember getting any in the past," Lisa Bleich, an admissions consultant, told The New York Times.

As college tuition hikes and student loan debt continue to rise, many believe that increased competition may be exactly what the doctor ordered. Bev Taylor, founder of a private college consulting firm, indicates that higher education as a whole may need an incentive to become more sustainable.

Struggling colleges and universities may also need to offer additional incentives to get noticed by students to be able to meet enrollment goals. One way to do this, as Taylor pointed out, may be for schools to offer merit scholarships to high achievers. Colleges and universities may also need to tightly focus on graduating students as well as just getting them in the door.