Study: College Football Can Cause Structural Differences in the Brain 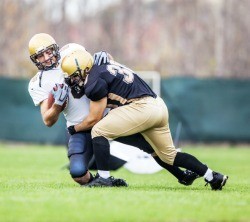 A new report from the Journal of the American Medical Association (JAMA) recently revealed some worrying news about the cognitive health of former and current college football players. The problem: Results from a study conducted by the Laureate Institute for Brain Research in Tulsa showed structural differences between the brains of long-term football players and those who do not play contact sports. Researchers believe the differences may have been caused by repeated hits to the head or concussions resulting from game play, although only limited information on long-term repercussions is available.

According to the Los Angeles Times, this new set of research was conducted by analyzing the high-resolution brain images of 50 college-level football players and 25 of their non-playing peers. A key discovery, according to researchers, is that the hippocampus -- a part of the brain that deals with memory and cognition -- was noticeably smaller in those who played the contact sport. However, researchers have yet to investigate the long-term effects of a smaller hippocampus and whether factors other than repeated blows to the head are actually causing the shrinkage. The study's authors are hoping that their findings will "serve as an impetus for future longitudinal research."

"Other studies have evaluated the effects on older athletes, such as retired NFL players, but no one has studied 20-year-olds until now - and the results were astounding," Patrick Bellgowan, director of cognitive neuroscience at the Laureate Institute for Brain Research in Tulsa, Oklahoma, and senior author of the study, said in a press release quoted by CBS Sports. "The next step is to assess what caused this difference in hippocampus size."

Other results from the study include the fact that college-level athletes displayed slower reaction times and lower levels of cognition compared to non-athlete participants. Furthermore, as Bloomberg noted, smaller hippocampus size and a slower reaction on cognitive tests was recognized on college athletes who had and hadn't experienced a concussion.

A separate study also pointed to a dramatic jump in emergency room visits for brain injuries since 2006, although most of the increase has been attributed to falls taken by the very old or very young. Jennifer Marin, from the University of Pittsburgh School of Medicine's pediatrics department, believes that it's time to explore why injuries are on the rise and what can be done about it.

According to CBS Sports, all of this research comes at a crucial time in college sports, since head trauma in sports has become a contentious issue. NCAA stakeholders have even begun discussing limited full-padded practices during the season in an effort to cut down on injuries.

The JAMA report also proves just how important it is for athletes to understand their injuries and not ignore them. According to Bellgowan, the best chance for recovery from brain trauma comes from seeking treatment for injuries, even if symptoms have abated.

"The key take-home message, especially for parents, is when in doubt, get it checked out," Bellgowan told Bloomberg. "It's a real injury. Parents basically think once the symptoms are gone their kids are better, and that's not necessarily true."

"With or without a history of concussion, football impacts memory," latimes.com, May 13, 2014, Melissa Healy, http://www.latimes.com/science/sciencenow/la-sci-sn-concussion-football-memory-20140513-story.html

Career and Education News
Home >
News>
Study: College Football Can Cause Structural Differences in the Brain