Pew Research Study: Median Net Worth of under-40 College Grads with Student Debt Is Only $8,700 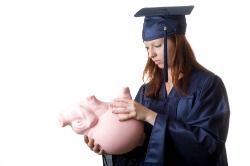 Should only rich students go to college? TIME posed this question recently following the publication of a new study indicating college graduates with student debt have a lower median net worth than those who did not go to college at all. While TIME acknowledged that the idea that college should be reserved for the wealthy "smacks of elitism," the data will still likely play into ongoing national debate about the importance of college -- and the real cost of student debt.

The new report published by Pew Research found that young college graduates with student loan debt have a median net worth of $8,700, a fraction of the $64,700 that the same group without college loans is worth. It is also less than the $10,900 their peers who did not go to college at all are worth, a point TIME suggested might be the most interesting takeaway of the entire report.

Another interesting note highlighted by the Los Angeles Times: It is not student loan debt itself that puts young college graduates behind, since student loans account only account for about $13,000 of their $137,010 total median debt. The rest can be attributed to other types of debt, such as car loans and credit card borrowing. Nonetheless, graduates with student debt carry nearly twice the $73,250 in debt that those without student loans carry.

"Young adults with student loan debt are starting out behind in building their nest eggs," Richard Fry, the lead author of the new study, told the Los Angeles Times. "College grads with student loans are benefiting from higher incomes because of their degrees, but about four in 10 borrowers are weighed down with a substantial amount of debt that extends beyond student loan debt."

TIME suggested that the fact that young workers with student debt have a lower net median worth than their peers without any education under their belts could be another data point in an ongoing national discussion about the value of attending college in today's market. According to Pew, however, college is still very much worth it, especially where earnings are concerned.

"College-educated student debtors tend to have much higher household incomes than those who did not complete college (nearly $60,000 versus low $30,000s)," Fry told TIME in an email. "The typical benefit from completing college is immediate in terms of household income."

Pew Research Center stated that its findings support a link between student debt and individual economic well-being: Young college graduates with student debt report being less satisfied with their personal finances than those who did not borrow money to finish school, and they are also less likely to see an immediate payoff for their investment.

Career and Education News
Home >
News>
Pew Research Study: Median Net Worth of under-40 College Grads with Student Debt Is Only $8,700