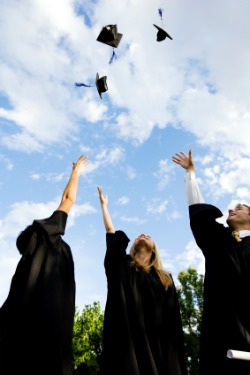 Parents of college applicants are more likely to send their children to schools with higher graduation rates, especially if they have lower income levels or know less about the college application process, a recent study found.

The survey, conducted by the American Enterprise Institute for Public Policy Research, sought to determine how graduation rates shape high school parents' perceptions of colleges, The Chronicle of Higher Education reported. In the study, one group of parents received basic facts about two public colleges in their state, including costs and selectivity. Given the same information, the other group also received the graduation rates for each institution.

Andrew P. Kelly, a research fellow at the institute who co-authored the study, said the results underscore the importance of providing helpful information about colleges and universities to consumers, particularly those who are less well-informed.

"It's heartening, to some extent, that these findings are the way that they are," Kelly said. "The college-completion agenda is not about high-achieving students with well-off parents. It's about guiding students who typically lag behind."

According to The Washington DC Examiner, with the six-year graduation rate for US colleges and universities currently standing at about 53 percent, officials are encouraging parents to focus more on an institution's record for matriculating its students. Evaluating colleges and universities based on graduation rates, the researchers said, is the best practice when selecting schools, provided that parents have access to that information, the study noted.

Moreover, the researchers recommended that the Department of Education require all colleges participating in federal student aid programs to report their graduation and retention rates clearly on all admissions and financial aid correspondence with students. Publicizing this data, they argue, would allow students and their families to easily distinguish colleges from one another and make informed decisions. These suggestions are coming at a time when the Obama administration is embarking on a "college completion agenda," a push by the federal government to not only increase the number of students gaining admission to college but also improve graduation rates.