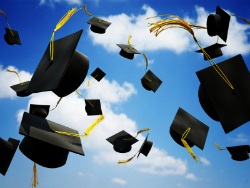 Just one year after graduating from high school, most members of the Class of 2010 already see the benefits of a college education.

That is the finding of a recent College Board survey, entitled One Year Out, which asked recent graduates to evaluate their high school experience.

Although 2010 high school graduates expressed overall satisfaction with their experience, almost all respondents had some negative feedback or criticism. For instance, with just one year of college under their belts, almost half (47 percent) said they wish they had worked harder in high school. Thirty-seven percent felt that high school requirements should be more difficult and 44 percent said they wish they had taken more math, science and writing-intensive courses to better prepare for the rigors of college and the workforce.

As a result of these shortcomings, 54 percent felt that their college courses were more difficult than expected. Moreover, almost a quarter reported that they had to take non-credit remedial or developmental courses.

According to the Los Angeles Times, many students also said their high school should have done more to prepare them for life after high school in general.

"Preparing students for life after high school was something that I wish would have been further stressed," said one respondent. "My school did an excellent job or preparing kids for college and getting them to actively look for the right college, but that's it. There was no emphasis on all the hardships that would come alongside that, such as maintaining a job profitable enough to provide for college tuition, and absolutely no light was shed on the possibility of internships or apartments."

Indeed, the press release noted that cost was a barrier for many students, with five in nine saying that it was very or pretty difficult for them to afford college. More than half of those who did not go to college said it was because they could not afford it and as the Los Angeles Times reported, 40 percent of self-described affluent families said cost was a challenge.

However, despite the barriers, students are not giving up. Most (86 percent) said that a college degree is worth the time and money, noted the press release. So much so that 76 percent of those not currently enrolled in college also thought earning a degree was worth it. And, according to The Chronicle of Higher Education, more than 80 percent of non-college students said that they planned to complete a degree in the future.

"Despite Cost Concerns, Most Recent High-School Grads Say College Is Worth It," chronicle.com, August 30, 2011, Beckie Supiano

"One Year Out: Findings From A National Survey Among Members Of The High School Graduating Class Of 2010," August 18, 2011, Hart Research Associates