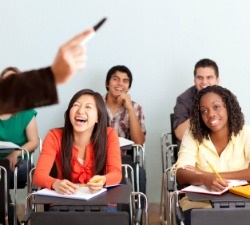 Once again, the U.S. Supreme Court is preparing to rule on the constitutionality of race-based college admissions policies. As Inside Higher Ed notes, while virtually all college presidents publicly contend that reversing such policies would undermine the quality of education in the United States, a new survey suggests that for many, their private views may not match their public stances.

"The diversity we seek and the future of the nation do require that colleges and universities continue to be able to reach out and make a conscious effort to build healthy and diverse learning environments that are appropriate for their missions," the board of the American Council on Education said in a statement last year, as reported by Inside Higher Ed. "The success of higher education and the strength of our democracy depend on it."

But according to the results of the new survey, only 70 percent of campus leaders agreed or strongly agreed with the idea that race consideration in admissions has had a mainly positive effect on higher education in general, and only 58 percent said such policies have had a "mostly positive effect on education" at their respective institutions. Roger Clegg, CEO of the Center for Equal Opportunity, told Inside Higher Ed that he is not surprised college presidents feel pressure to support affirmative action.

"There are institutional pressures brought to bear on college presidents that push them to be more publicly supportive of racial preferences than in their heart of hearts they think is wise," said Clegg. "In likelihood, the actual number is even lower than that, because even though they were being assured anonymity, on questions like this people are nervous."

College presidents may not be the only experts questioning the benefits of race-based admissions. Richard D. Kahlenberg, a senior fellow at the Century Foundation, told Inside Higher Ed that those college presidents who do strongly support affirmative action are "completely out of step both with where the court appears to be heading and where the American public is on this issue." And Esther J. Cepeda, a Latina who writes on national and local politics and social issues, said in a column published by San Antonio Express-News that race-based affirmative action could actually increase -- not limit -- racial divides.

"Despite hand-wringing from those who cherish the value of diverse college campuses -- and outrage from activists who consider any thought of eliminating coordinated racial balancing as an assault on civil rights -- taking race and ethnicity out of the admissions equation could turn out to be good," wrote Cepeda. "If the court's ruling makes merit-based admissions the norm, would students of all races begin respecting each other as equals rather than assuming that minorities only got in to 'diversify' the school?"