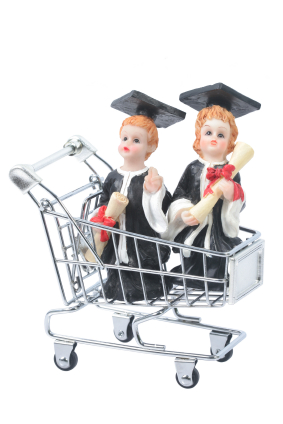 A new program will allow Wal-Mart and Sam's Club employees to earn college credits for performing their regular jobs.

Some workers will be able to earn nearly half the credits required for an associate or bachelor's degree while doing jobs such as loading trucks and ringing up purchases. The credits will be earned through the online American Public University at a discounted tuition of $212.50 per undergraduate credit hour and $255 for graduate credits, reports the Associated Press. Wal-Mart will also invest $50 million over three years in tuition assistance for participating employees.

The New York Times reports that about half of Wal-Mart's 1.4 employees currently have high school diplomas but no college degrees.

"If 10 to 15 percent of employees take advantage of this, that's like graduating three Ohio State Universities," noted Sara Martinez Tucker, who serves on Wal-Mart's external advisory council and was quoted in the Times. "It's a lot of Americans getting a college degree at a time when it's becoming less affordable."

The amount of credits earned on-the-job could significantly reduce employees' tuition cost: For example, a department-level manager could earn 24 on-the-job credits for free and would probably pay just under $7,900 for an associate's degree. But a cashier would only be eligible for six on-the-job credits and would pay about $11,700 for the same degree.

The Washington Post reports that about 200,000 workers are currently eligible for the program. To qualify, they must be employed full-time for at least a year and receive favorable reviews. Part-timers must be working at least three years and receive good reviews.

Wal-Mart executives emphasized that the goal of the program was to provide more education to its employees and ultimately build a better work force.

"People will surprise you if you give them opportunities," said Tom Mars, chief administrative officer at Wal-Mart, who was quoted by the Post. "The single biggest competitive advantage we have. . . is our associates."

The program's flexibility has already attracted the attention of workers interested in pursuing higher education. James Murphy, a salesman from Texas, told the Post that he once tried to juggle work with school but eventually had to drop out because the schedule was too unmanageable. But he still dreams of receiving a bachelor's degree in political science or communications.

The new program, he noted will allow him to work and pursue his degree while not having "to worry about sacrificing one or the other."