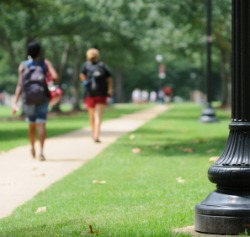 College ranking lists are so common these days one might find it difficult to discern one from the next. Most tend to have a specific focus, or at least have some set criteria by which schools are evaluated. Not so with a new list that ranks schools based on what ABC15 calls "no real criteria" whatsoever. This could spell bad news for schools that are featured for less industrious qualities.

The Huffington Post's "Most Interesting Places To Go To College" ranking lets schools' academics take a backseat to things like wild tailgating traditions or political acuteness. The list features schools of all sizes and types, from big name public and Ivy League schools to lesser-known private institutions. As the list's author notes, the list is entirely subjective, because "sometimes you just want to know where you're going to have a good time."

The first school featured on the list -- though The Huffington Post warns the schools are listed in no particular order -- sets the tone for the remaining schools: The University of Wisconsin-Madison. What makes it so interesting? According to the report, UW-M is a major party school and has been named "sexiest" college in the nation. The satirical publication "The Onion" was founded here, and alum Anders Holm of "Workaholics" fame made headlines when he delivered a major commencement address there last year. In other words, UW-M is quirky -- a quality that is apparently prized at the schools on this list.

Other schools were featured for other seemingly oddball reasons. The University of Minnesota - Twin Cities, for instance, earned its spot by being cold and having a decent music scene, and the University of Colorado at Boulder was noted for its deadly wildlife on campus (think: mountain lions and bears) and its annual smokeout in which thousands of students gather to smoke marijuana on campus. Brown University may be known as an academic powerhouse, but this particular list chose to focus on its annual Naked Donut Run and similarly controversial events.

Another trait that seemed to draw The Huffington Post's attention: political activism. Both the University of California, Berkeley and Cooper Union in Manhattan were noted for their students' affinity for protests, and the latter seems to have earned extra points for the time its protesting students devised a pizza pully system designed to feed its young rabble rousers.

These represent just a few of the 19 schools featured on Huffington Post's list, which may read at first like a mishmash of random institutions. Does this mean administrators should not take it seriously, especially when their schools are featured for less savory trends? Not necessarily. The Hechinger Report notes that a new study from the American Educational Research Association shows that college rankings really do impact enrollment numbers. In cases where schools are featured for negative reasons -- like being named one of Princeton Review's top party schools -- enrollments dropped by as much as nine percent.