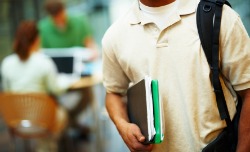 The retention rate for American two-year public colleges has spiked to its highest level in the past 27 years, while the retention rate at four-year public universities has declined to its lowest level during that period, according to the ACT, a nonprofit organization that is known for administering a college entrance exam that is an alternative to the SAT.

According to a press release, the ACT measured college retention rates--the percentage of first-year, full-time students who return to the same school for their second year. Overall, the rates remained relatively stable. Sixty-seven percent of all first-year students at American two and four-year colleges came back for their second year, compared to 66 percent last year. The annual survey pooled data from more than 2,500 two-year and four-year colleges and universities across the country.

"College retention is a very challenging problem facing our nation," said Jon Whitmore, ACT's chief executive officer and former president of San Jose State University and Texas Tech University. "If we are to meet the goal set forth by President Obama to increase the number of young adults who earn a college degree, we must not only ensure that more students have access to college, but also make certain that they are well prepared to succeed once they get there."

Most notably, retention rates are much lower at two-year than at four-year institutions. The percentage of students at two-year schools who returned to the same institution for a second year has been increasing, from 53 percent in 2005 to 56 percent currently. At four-year colleges, by comparison, retention rates have been declining, from 75 percent in 2005 to 72 percent currently.

Wes Habley, ACT's principal associate, who has been conducting analyses of retention data for the not-for-profit organization since 1985, says the trend may be related to the struggling economy.

"With many jobs gone and fewer new jobs available, high school graduates and newly employed workers may be seeking the fastest, least expensive route to gainful employment," he said. "Two-year colleges tend to be less costly than four-year schools and offer programs that provide entry into specific jobs. Those factors may increase students' motivation and incentive to come back for their second year."

"If I would've went to a four year college or university instead of a two year college I probably wouldn't have continued my education because of the expense," she said.

In response to the the survey results, higher education officials are looking for ways to improve retention rates. Colleges are increasing their use of "learning assistance measures," which include remedial courses, study groups and tutoring sessions. According to The Washington D.C. Examiner, these strategies have become more popular and effective than academic advising and first-year transition programs, which aim to improve retention.