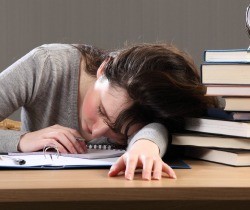 Are you a morning or a night person? Your answer may be linked to your choice of college major, a new study suggests. Your biological predisposition to being a night owl − those who like to stay up and wake up late − or a morning lark − those who prefer to go to bed and arise early − influences the major you choose, Red Alert Politics reported.

"A student's morningness-eveningness influence on their selection of a college major likely involves both personality traits and their built-in biological tolerance for early (morning-oriented) versus late or irregular (evening-oriented) job hours," stated principal investigator Dr. Frederick Brown in an American Academy of Sleep Medicine press release. Brown is an associate professor of psychology, cognition and wellness at Pennsylvania State University.

The study revealed that the two majors that received the highest scores for night people were management science and information systems along with administration of justice. In contrast, nutrition was the major most greatly associated with morning people.

In terms of sleep duration, students who were media majors were most likely to lack sleep regularly, getting anywhere from 3 to 3.6 fewer hours than they would have liked during both weekdays and weekends. The major in which students received the most sleep was speech communications. These individuals usually got only 10 to 18 fewer minutes of sleep than they would have wanted during the week.

"…[I]ndividuals who show strong aptitude for certain professions may be dissuaded from pursuing them in favor of following their preferred morning vs. evening active routine," Brown told The Huffington Post. "In addition, they may become dissuaded if university time-of-day scheduling of coursework in those majors is in conflict with their biologically suitable times of day."

The study's researchers analyzed data collected via questionnaires about morning or evening preferences from 1,200 college juniors and seniors, who cumulatively represented about 30 majors, according to the press release. Subsequently, 492 of those participants also answered questions about what times they wanted to go to bed and wake up, what times they actually went to bed and woke up, and how long they slept.

The authors noted prior research has indicated personality and sociocultural factors influence academic major choice, but few have looked at whether biological inclinations might do the same.

Brown also said people's sleep preferences can have negative effects on individuals' success both during and after college: "A mismatch of job time and biological time, as well as intolerance to partial sleep loss, can negatively influence peak job and school performance," Brown told The Huffington Post. "It can become a stressor and increase on-the-job errors or accidents."

The abstract for this study's findings was published in an online supplement of the journal, "SLEEP," according to the press release, and Brown was expected to present the results last week at SLEEP 2013, the 27th yearly meeting of the Associated Professional Sleep Societies.