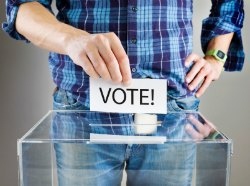 Pundits and poll watchers who have debated whether or not young voters would report to the polls for Tuesday's presidential election may have their answer. New data published by the Center for Information and Research on Civic Learning and Engagement (CIRCLE), suggests that this key demographic not only participated in the electoral process, but may have even secured President Barack Obama's re-election.

CIRCLE, a youth research organization at Tufts University, estimated this morning that 22 to 23 million young American voters under age 30 voted in Tuesday's presidential election, a figure that represents at least a 49 percent turnout. Furthermore, young people supported President Obama over Republican Challenger Mitt Romney by a 24-point margin, a trend that may have tipped the scales in Obama's favor. CIRCLE results implied that if Romney had won half the youth vote -- or if half of young voters had not shown up at the polls -- he might have won in key battleground states like Florida, Ohio, Pennsylvania and Virginia.

"Confounding almost all predictions, the youth vote held up in 2012 and yet again was the deciding factor in determining which candidate was elected President of the United States," CIRCLE Director Peter Levine said in the report. "...Considering that there are 46 million people between 18 and 29, this level of turnout makes them an essential political bloc."

Heather Smith, president of Rock the Vote, also acknowledged the significance of such high voter turnout among young people in a statement issued Tuesday night, according to The Huffington Post. She wrote that this election shows there is no longer an 'enthusiam gap' that exists among young voters. In fact, CIRCLE reported in the last three elections nearly 50 percent of youth have turned out to vote compared with 37 percent in 1996 and 41 percent in 2000.

"This proves that any campaign that ignores young voters does so at its own peril," Smith said, according to The Huffington Post.

The Daily Californian reported that some of these young voters were of college-age and engaged in the electoral process throughout the evening in California. Many were glued to their televisions or attending political rallies, such as the one held in support of Obama at the University of California, Berkeley's Sproul Plaza.

"It is nerve-racking, but exciting, because it's the first time I'm able to see the outcome of the things I voted on," UC Berkeley Junior Kenzie Mittelman told The Daily Californian.

The Berkeley College Republicans were also following the results closely, if less enthusiastically. Mia Lincoln, a senior and active member of the BCR, told The Daily Californian that Romney would have made for a moderate president and brought people together.

CIRCLE says it used national exit polls, demographic data and voting counts to calculate young voter participation, but indicated that some of that data is subject to re-weighting. College age voters represented 19 percent of the total voter turnout, noted The Huffington Post.