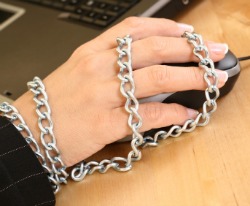 When it comes the Internet, college students are decidedly plugged in, leading the nation in its use. A new study from researchers at Missouri University of Science and Technology, Duke University Medical Center and the Duke Institute of Brain Sciences suggests students' internet habits may simulate a true addiction. According to at least one researcher, that may be a problem.

Science Daily reports that researchers tracked the Internet usage of 69 college students over the course of nine months, though subjects were given pseudonyms for privacy. Participants completed a 20-question survey called the Internet-Related Problem Scale, which measures the severity of one's potential web addiction on a scale from 0 to 200. Symptoms of addiction measured by the IRPS include introversion, withdrawal, craving, tolerance and negative life consequences, among others. The average score among participants was 75, though some scored as high as 134.

"About 5 to 10 percent of all Internet users appear to show web dependency, and brain imaging studies show that compulsive Internet use may induce changes in some brain reward pathways that are similar to that seen in drug addiction," Dr. P. Murali Doraiswamy, a professor of psychiatry and behavioral sciences at Duke University Medical Center, told Voices of America.

In addition to how much students used the Internet, researchers also studied how they used it, dividing use into several categories, like gaming, chatting, file downloading and social networking. According to Voices of America, the highest total IRSP scores most closely correlated with gaming, chatting and browsing; the lowest scores with email and social networking. Internet activities were also associated with specific addiction behaviors. Gaming, for instance, was closely linked to introversion, craving and loss of control; chatting was tied to introversion and craving.

Dr. SriramChellappan, an assistant professor of computer science at Missouri S&T and the lead researcher in the study, told Science Daily that the findings provide "significant new insights into the association between Internet use and addictive behavior," but his colleague, Doraiswamy, suggests the long-term impact of that addiction is unclear.

"We tend to take drug-related addictions more seriously than if someone were using the Internet as a drug," Doraiswamy told Voices of America. "The negative consequences of the Internet may be quite underappreciated."

Nonetheless, researchers caution that the current study is exploratory and does not necessarily indicate a true cause and effect relationship between Internet use and addiction. Other factors, like mental illness, could also play a role.

The new research was presented at the IEEE Internet Conference on Advanced Networks and Telecommunications Symptoms in India last month, reports Science Daily.