College Students Opt Not To Vote During Midterm Elections 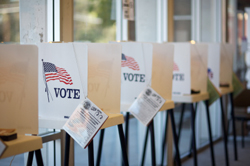 During the 2008 presidential election, a record number of adults 18- to 29-years old worked on campaigns and voted. For today's midterm elections, however, The New York Times reported that college students have been less involved and are more ambivalent.

According to Washington Square News, a Harvard survey, which polled 2,004 18- to 29-year-olds, showed that only 27 percent of young adults would "definitely be voting" today. During the November 2009 survey, 39 percent reported that they would vote.

At New York University, some students said they were uninformed, uninterested or simply too busy to vote. Bree Procelli, a sophomore at the College of Arts and Science, said, "It's hard as a college student to be able to keep up with all the political issues and candidates because you're so busy, you don't always have time every day to read the newspaper."

Some students were too busy to even register. Biochemistry major Navneet Sahota said she had intended to register over the summer, but could not find the time to do so because of her demanding part-time job.

Many young voters also feel let down and left out, reported The New York Times. While the younger generation was once the priority, focus seems to have shifted towards older voters. "[Obama] made young people feel important, then he got into office and there was no one talking to us," said Jessica Kirsner, a junior from Houston and vice president of the College Democrats, an organization that works to engage college students on local, state and national races. Kirsner argued that more could have been done to keep young voters engaged.

Indeed, as The New York Times pointed out, President Obama seemed to refocus on young people just a few months before the election.Furthermore, although Organizing for America, the group that stemmed from Obama for America, brought experts to college campuses to explain health care legislation, talks focused on Medicare, making many students feel alienated and ignored.

This loss in momentum among young voters is nothing new, noted Washington Square News. In fact, overall voter turnout during midterm elections is usually lower than presidential elections. Most NYU students reported that they would rather have a say in who becomes president, rather than governor.

Aware of this trend, Tim Loew, director of academic planning and operations at Becker College wanted to try something new.According to The Chronicle of Higher Education, Loew asked a professor of game development and a few students to design an online game that would encourage participation in Massachusetts's gubernatorial election. The game, called Race for the Ballot, allows players to select one of the state's four candidates and steer the politician around a track before time runs out on Election Day. When choosing a candidate, players are offered links to the candidates'websites for more information. During the game, players must avoid politically themed obstacles and, of course, the other candidates.

When asked why he wanted to create such a game, Loew explained, "Active citizenship is an important piece of creating well-rounded graduates. I wanted to see if there was a way to encourage our students to discover the race in more detail than they would've on their own."

However, it appears that the trend will continue across the nation.According to The New York Times, in 2008, College Democrats at Columbia University had 130 students canvass for voters in Virginia. On Friday, the group organized a trip to a swing district in Pennsylvania. Of the 80 people who said they would participate, only 68 showed up. "People were infatuated in 2008," said group member Maddy Joseph. "The reality has set in, and that's frustrating for a lot of people."