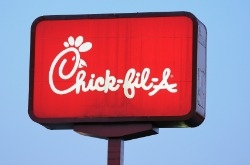 Weeks after mid-July's controversial comments from Chick-fil-A president Dan T. Cathy, colleges and universities around the country are still using Facebook, Twitter and online petitions to take a stance against the well-known fast-food chain restaurant.

As reported by the Minnesota Daily, more than 30 universities have petitions against Chick-fil-A on change.org and a petition to remove the restaurant from the University of Minnesota campus, started by student Matthew Haas, garnered more than 1,200 signatures in its first week.

Meanwhile, according to The Huffington Post similar petitions have picked up steam at New York University, an institution that has consistently been ranked as one of the best colleges for LGBT students by The Princeton Review. One petition, which a NYU student started even before Cathy's comments made their way through media outlets, has more than 15,000 signatures. New York City Council Speaker Christine Quinn has also expressed her support in removing the restaurant--the only Chick-fil-A in Manhattan--from the NYU campus.

"We are a city that believes our diversity is our greatest strength and we will fight anything and anyone that runs counter to that," wrote Quinn in a letter to NYU President John Sexton that was quoted by The Huffington Post.

According to The Chronicle of Higher Education, a survey by the University of California Los Angeles's Higher Education Research Institute found that just 28 percent of college students at four-year institutions nationwide call themselves "liberal". Still, more than 70 percent reported that they support same-sex marriage. As a result, The Chronicle noted that change.org petitions for the closure of various Chick-fil-A locations can be found online from schools such as Columbus State University, South Dakota State University and the Virginia Commonwealth University Medical Center.

Some schools, however, are not against the restaurant. Officials at Liberty University, in Lynchburg, Va., for example, expressed their support of the food chain and encouraged employees to eat there on Wednesday, which was dubbed national "Chick-fil-A Appreciation Day" by former Arkansas Governor Mike Huckabee. At the University of Louisville, student groups and officials openly criticized Cathy for his comments, but university president James R. Ramsey and provost Shirley Willihnganz said in a statement that the school would not take action against the restaurant.

Akshay Rao, a marketing professor in the Carlson School of Management, explained in the Minnesota Daily that while other large corporations, such as General Mills, Target and Amazon.com, have financially backed anti-gay groups, protests and boycotts against Chick-fil-A are more likely because of its strong association with one brand.

"Chick-fil-A is easy to identify," said Rao to the Minnesota Daily.