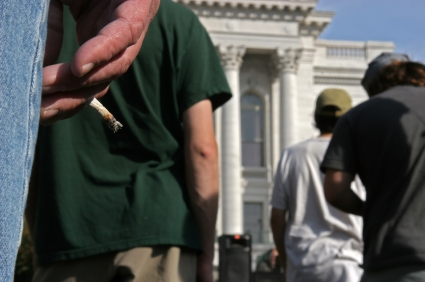 Did you know that April is National Alcohol Awareness Month? If you were on one of 80 college campuses across the country on April 1st you might have learned this, but what you'd have seen might have surprised you. The students holding signs, handing out flyers and gathering petition signatures were advocating for marijuana. No fooling.

According to the Washington Post, the national organization Safer Alternative for Enjoyable Recreation (SAFER), along with Students for Sensible Drug Policy (SSDP) and campus chapters of the National Organization for the Reform of Marijuana Laws (NORML) chose April Fools Day to organize a nationwide day of action to "highlight the relative safety of marijuana compared to alcohol, and to encourage public debate on whether college students should be allowed to use marijuana as a safer recreational alternative to alcohol."

The Longmont Times Call reported that at Front Range Community College in Longmont, Colorado students delivered a copy of SAFER's "Emerald Initiative" to the school's vice president. The document asks college officials to debate whether freer use of marijuana would reduce the incidence of dangerous drinking. Christopher Pezza, president of the local chapter of Students for Sensible Drug Policy, says, I will admit that smoking marijuana is bad for your lungs. But people who smoke marijuana aren't as likely as alcohol drinkers to engage in dangerous behavior."

Students at Fort Lewis College in Durango, Colorado gathered signatures for a student referendum on reducing penalties for marijuana use on campus. College officials seemed open to the idea of considering the students' request. Spokesman Mitch Davis told reporters of the Durango Herald that marijuana offenses are handled on a case-by-case basis and that there are no automatic penalties. He said, "We're happy to work with SAFER to make sure campus policies are clear, and penalties are clear and fair," but he added that college administrators are not bound by student referendums.

A news story run by WCTV about the action at Florida State University in Tallahassee showed red balloons bobbing on a campus green space. Each one represented 100 college students who die of alcohol related incidents every year. Their demonstration was to raise awareness about medical amnesty, one of the Students For Sensible Drug Policy's campaign initiatives. Also known as a Good Samaritan Policy, it allows people be protected from punishment when they call for medical help during an emergency relating to alcohol or other drugs.

John Mola of SSDP says, "Drugs really are a medical problem and not a criminal justice problem. We feel that by enacting sensible policies that reflect the fact that people are going to use drugs but reduce the harms associated with drug usage, we feel that those are the best policies."

Stay tuned for policy changes. The day when you see an announcement for a campus party that offers free joints--instead of free beer--may be closer than you think.