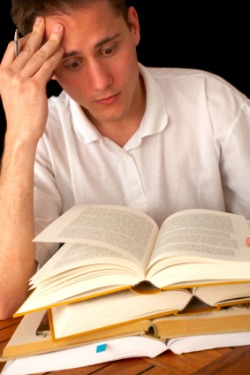 Pressured by financial concerns and the rigors of high school, college freshmen are reporting low levels of emotional health and higher marks for ambition to excel.

College counselors say the two are directly related, as students place more pressure on themselves to achieve, leading to additional stress.

The study, titled "The American Freshman: National Norms for Fall 2010," found that the percentage of students reporting good or above average emotional health dropped from 55.3 percent in 2009 to 51.9 percent in 2010, The Chronicle of Higher Education noted. The dip marks the lowest point since 1985, when the survey first posed the question.

The annual report is considered by many to be the country's most comprehensive evaluation of college students' attitudes, the Los Angeles Times reported. This year's survey, based on feedback from more than 201,000 incoming freshmen, pooled data from 279 four-year colleges and universities across the country.

Of the students surveyed, 75.8 percent rated their drive to achieve as above average or in the highest 10 percent, while 29.1 percent said they felt overwhelmed in high school, according to The Chronicle of Higher Education.

Denise Hayes, the president of the Association for University and College Counseling Center, says that setting more ambitious goals is correlated with declining levels of emotional health. Student aspirations, she says, are often tied to worries about money.

"College tuition is higher, so they feel the pressure to give their parents their money's worth in terms of their academic performance," she said. "There's also a notion, and I think it's probably true, that the better their grades are, the better chance they have at finding a job."

In addition, student responses varied by gender. Men were more likely to report good emotional health than women--59.1 percent of men opposed to 45.9 percent of women. This difference may be the result of different ways boys and girls are socialized at a young age, said Sharon Mitchell, the director of counseling services at the University at Buffalo.

"We may be hearing more about how women are feeling because it's acceptable for us to voice how we feel, whereas boys are taught that you should have everything together, you shouldn't let things affect you," she said.

According to The New York Times, college counselors say that the survey results are unsurprising; in fact, they confirm what they see in their offices every day. Increasingly, students are depressed, under stress and using psychiatric medication, prescribed even before they arrived on campus.

Psychology experts say that oftentimes young adults are unable to gauge the emotional well being of their peers and feel alone in tackling the challenges of daily college life.

"I don't think students have an accurate sense of other people's mental health," said Dr. Mark Reed, the psychiatrist who directs the counseling office at Dartmouth College."There's a lot of pressure to put on a perfect face, and people often think they're the only ones having trouble."