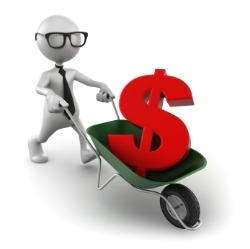 Many colleges students could be moving their funds from large financial institutions to regional or local banks on Bank Transfer Day, scheduled for November 5.

However, they plan to take it one step further and focus on change at the college level, according to GOOD. Capitalizing on the Occupy Wall Street momentum, these college-aged activists are expected to host demonstrations on Bank Transfer Day for what they've dubbed College Bank Transfer Day. Plans include delivering petitions and proposals, and requesting meetings with college administrators to demand they close their corporate bank accounts and move their money to community banks or credit unions.

American colleges and universities collectively control about $350 billion in endowments, most of which are held at financial institutions that lack connection and responsibility to the community, noted Dan Apfel, executive director of the Responsible Endowments Coalition, a New York-city based nonprofit organization dedicated to promoting responsible investment practices. Additionally, these schools also control about $100 billion in annual spending, Radio Arte noted.

While the goal sounds lofty, Apfel told GOOD that it's not. He said that schools can move money to other banks without compromising returns while creating a win for the community and the school in the process.

Bank Transfer Day was started by Kristen Christian, a small business owner, reported USA Today. She began the movement in response to the Durbin Amendment, a supplement to the Dodd-Frank Wall Street Reform and Consumer Protection Act of 2010. Sparked by changes in this amendment that limit the per-swipe fees that can be assessed by banks for debit card transactions, some banks, such as Bank of America, are looking at charging bankholders with assets below a certain amount a monthly fee to use a debit card. This has upset many cardholders.

University of Colorado Student Catherine Meyer, 23, is one of those college students who plans to move her money from a major bank to a credit union on November 5.

"I'm switching to a credit union because of tiny fees that just started to add up with Wells Fargo," Meyer told USA Today. "I don't feel connected to my bank, as I would like to with people taking care of my money. I'm sick of overdraft fees and other little fees and strings-attached nonsense."

Meyer, eagerly awaiting Bank Transfer Day, recommended that students shop around, gather information and then decide where to put their money.

Steven Barta, a University of South Florida student, 20, already closed his bank account and moved to a credit union, reported USA Today. The credit union does not require him to maintain $500 in both his checking and savings accounts to avoid a $7 monthly fee like his bank did. Barta, who works to cover the costs of his college tuition, said he shouldn't have to pay fees as he's working on getting an education and doesn't make enough money right now to do so anyway.

"Banks are just ripping us off every month," he said.