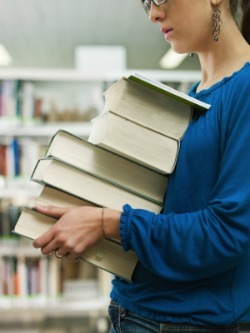 Between skyrocketing costs--for tuition and books--and the physical strength required to lug around heavy textbooks, it's no big surprise that college students are fed up with traditional course materials. While this might not have been the case last summer, a recent survey showed that students would now go to great lengths if it meant they would not have to carry around another textbook.

According to GigaOM, a survey conducted by Kelton Research on behalf of education software company Kno revealed that 73 percent of students would be willing to do something they normally would not do--including giving up dating and sex for an entire year--in exchange for not carrying around another textbook. Furthermore, 71 percent of respondents said they would prefer to access course material via a mobile or desktop application or through the Web.

Cost and convenience seem to be the primary reasons behind the desire to go digital. As noted in a press release, 24 percent of students reported that they lug around 20 pounds or more in textbooks a day. Not only are these textbooks heavy, but they are also expensive--students can expect to spend around $2,400 on textbooks during their undergraduate career. They can also be a hindrance. To lighten their loads, students do not carry all the books they need at once. As a result, 46 percent of college students said they were unable to study because they did not bring the right book with them. Twenty percent complained that they lost their books and 16 percent had missing pages in their books. If given the option of use a digital format, 54 percent said it would make their studies more efficient and 62 percent said they would study more often.

Students also reported that they already make sacrifices in order to pay for their not so beloved textbooks. Seventy five percent of students said had to give up entertainment, such as going to the movies or concerts, in order to pay for books; 57 percent did not travel during vacations in order to buy books and 45 percent cut back on food. Students hated textbooks so much that 34 percent would rather take 8am classes every day for their entire college career than carry another textbook or would stay home every Saturday night for a semester. The one area students would not budge, however, was alcohol--only 19 percent said they would spend less on beer in order to buy books.

TechNewsDaily noted that the survey also showed that most students did not think their professors did enough to integrate technology into the classroom. Nonetheless, students were optimistic that this would change--44 percent said they thought that in five years, professors would no longer require students to carry physical textbooks.

According to the press release, 506 college students, aged 18 and over (and 21 and over in the case of alcohol-related questions), were surveyed online between July 14 and July 21, 2011.

"A Quarter of College Students Would Give Up Sex to Never Have to Carry Around a Textbook, National Survey Finds,"

"College Students Would Give Up Sex to Not Lug Textbooks," technewsdaily.com, July 27, 2011, Samantha Murphy