College Students Who Sleep In Drink More And Have Lower GPAs 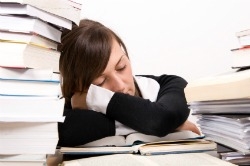 Sleep experts often say that college students do not get enough sleep; however, a new study reveals that students who sleep more tend to drink more and get lower grades.

According to an American Academy of Sleep Medicine press release, although having a class schedule with a later start time allows students to get more sleep, most students with late schedules stayed out drinking later into the night, negating the benefits of being able to sleep in.

HealthDay reported that Thacher and researchers studied 253 college students. Participants were asked to complete cognitive tasks in addition to keeping a sleep diary for one week and answering questionnaires on their sleep, class schedules, substance use and mood.

Data revealed that students who started classes later were not well rested, were sleepier during the day and earned slightly lower grade point averages. Furthermore, students who described themselves as "night owls" were more likely than "morning people" to report more alcohol use or more binge drinking, which appeared to be the cause of lower academic performance. As HealthDay noted in another article, a separate study showed that sufficient sleep boosts students' ability to learn. However, while sleeping in allows students to get more sleep, alcohol tends to disrupt a good night's rest.

"The effects of later class start times might include more sleep, but this might be offset by lower quality sleep, which in turn might affect their ability to engage, intellectually, with their coursework," explained Thacher in the press release.

According to the researchers, these results differ greatly from previous studies that have shown that middle and high school students benefit from later school start times, suggesting that the issue at hand may be college students' lifestyle choices, including late night drinking.