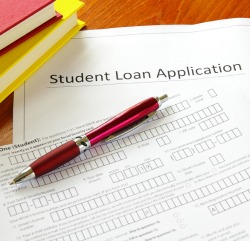 In a letter to Education Secretary Arne Duncan, prominent Democratic Representative Elijah E. Cummings (Md.) charged that many colleges and universities are leading students astray when it comes to helping them apply for federal financial aid. According to the Washington Post, Rep. Cummings and his staff identified schools who had misleading information about applying for federal aid posted on their websites during an investigation last summer. In his letter, Rep. Cummings pointed out that while students are only required to fill out a Free Application for Federal Student Aid, or FAFSA form, in order to be eligible for federal aid, many colleges and universities are asking students to fill out additional forms that aren't free or even necessary.

Rep. Cummings alleges that at least 111 schools are requiring students to fill out additional forms when applying for aid, all in direct violation of the Higher Education Act which explicitly states that college students must only fill out a free FAFSA form to apply for federal aid.

"Instead, these institutions appear to be establishing additional requirements for students to complete costly additional forms, including the fee-based PROFILE form developed by the College Board, to be considered for any financial aid," wrote Rep. Cummings in his letter to Secretary Duncan. "Congress banned this practice in 1992 because it creates undue hurdles for students seeking federal student aid."

While colleges and universities may require students to fill out additional forms in order to qualify for their own aid, or aid from other entities, the FAFSA form is the only form required for those applying for federal aid. According to a recent post on Inside Higher Ed, 58 of the 111 schools accused of misleading students have language on their websites that explicitly tells students they must fill out a CSS profile, for a fee, in order to be considered for any type of aid, including federal aid. The websites of the other 53 schools named suggest that students fill out both forms without being specific about which form is needed for which type of aid.

The complaint to Secretary Duncan included a list of the 111 schools believed to be in violation of the Higher Education Act. Among them were prominent schools such as Harvard College, American University, Georgetown University, the College of William and Mary, Duke University, Stanford University, Notre Dame, and George Washington University.

Rep. Cummings suggested a meeting to discuss how he and Secretary Duncan might address this issue and properly warn schools that their language is in direct violation of federal law. The hope is that, by addressing this subject, the federal government can prevent students from being unnecessarily charged for filling out forms which are not actually required to qualify for federal aid. According to the New York Times, the College Board's form is much more complex than the FAFSA form and typically costs students $25 to send it to one school and an additional $16 for each subsequent school.