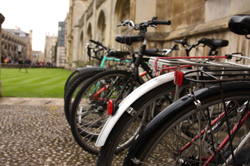 In an effort to reduce environmental impact, more colleges have started to offer bike-sharing programs on campuses across the country.

USA Today reported that nearly 90 American universities offer some form of campus bike program and more colleges are planning to launch a program this year. These programs are either free or low-cost and bikes are available to all students and, at some schools, faculty and staff as well. At Drury University, for example, students pay a $20-a-year sustainability fee, which then grants them access to 40 new bikes. At New York University, officials launched a bike program this summer with a fleet of 30 bikes that students can check out for free from the front desks of most residence halls.

In 2008, the University of New England in Biddeford, Maine, raised parking permit fees and began to give away free bikes to freshmen who promised not to bring their cars when classes started. Kathleen Taggersell, spokeswoman for the university, said the school has given out 530 bikes since then. As a result of the program's popularity, the school was able to turn a 95-space parking lot into a basketball court with a river-view tent for campus events.

Jeremy Friedman, manager of sustainability initiatives at New York University stated that most of the demand is coming from students, who are increasingly concerned about their impact on the planet. The recession has also encouraged the public to embrace biking culture because not only is biking environmentally-friendly but it is also much cheaper. Phillip Sheridan, a student at Roanoke College which recently started its "RCycles" bike-sharing program, said in an article, "I live two miles from campus. Riding the bike takes just five minutes more to get to campus but I have a parking space every day--right next to the building. Plus, I'm getting exercise, being environmentally friendly and, at the same time, saving money on gas."

Some campuses have installed automated systems to make renting a bike more convenient for students. At Washington State University in Pullman, students can swipe their student identification cards to unlock a bike from any of the four campus docking stations. The convenience boosted the program's popularity--according to Jaime Bentley, the university's environmental well-being coordinator, 529 students checked out a bike in the first three weeks this fall, whereas 583 users checked out a bike in all of last year.

Bike-sharing programs are not the only efforts campuses are making to be sustainable. According to The Cavalier Daily, the University of Virginia will be opening its first environmentally sustainable residence building in August 2011.

In early 2007, the Board of Visitors began requiring all future university construction and major renovations to be certified by the Leadership in Energy and Environmental Design. The two green dorms, which have low-flow plumbing, variable systems for fans and water, night motion sensors to turn off lights when rooms and hallways are empty and energy dashboards to monitor energy and water consumption in real time, are part of a $45.5 million Alderman Road Replacement Project. A common building is also underway and all three buildings were designed for LEED Silver certification.