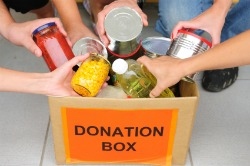 Students, administrators and alumnus of colleges are donating turkeys and canned food this year to make sure others have the makings necessary for the Thanksgiving holidays.

The motivation for giving varies at the schools across the country, but it is clear that concern for others is a priority.

At West Coast University, a healthcare school located in southern California, 100 18-pound turkeys and 100 boxes of stuffing were donated to a group called Share Our Selves, or SOS, according to The Daily Pilot. The donations will be part of the Thanksgiving food bags distributed to needy families and have not gone unnoticed.

"Obviously, having turkey and stuffing in the bags makes a huge difference," Elizabeth Evans, SOS marketing and communications manager, was reported as saying in The Daily Pilot.

At Monmouth College, located in Monmouth, IL, the school president made a promise to donate one turkey for every point scored during a recent football game against Knox College. The president of Knox College also made the same commitment, according to Galesburg.com.

Together, the two presidents, accompanied by volunteers, delivered Thanksgiving food to a community center in Monmouth as well as a food pantry in Galesburg. More than 80 turkeys were donated in all as were canned goods that were collected at the Monmouth-Knox football game.

This isn't the first year that schools gave during the holidays, however. Last year, students from Bethune Cookman University, Florida A&M, Hampton University and Morehouse University, all located in Florida, also worked to collect and distribute food to those in need. In fact, it was the alumni of Historically Black Colleges and Universities, or HBCU, chapters at these schools that came together and championed the call to help, reported Alumni Roundup.

"This event is in keeping with the motto that has been instilled in Bethune Cookman graduates which states 'Enter to Learn and Depart to Service,'" said Johnny McCray, a graduate of Bethune University and now a local attorney in Florida.

Members of each of the four school chapters were asked to assist 15 families each. As a result, Thanksgiving meal essentials were distributed to a number of families throughout Broward County, FL, with 90-year-old Arrie Dowell being one of the recipients, according to Alumni Roundup.

"I think what they're doing is truly a blessing for me and my family," she was quoted as saying.

This year, some school members are going even further by actually preparing meals for others. While these meals may not necessarily be for the needy, they are provided for those who may be in need of community or a sense of cheer.

Take, for example, Lorain County Community College, located in northern Ohio. There, free Thanksgiving-style meals are available tonight to those unable to share dinner with family or friends, reported The Morning Journal. The event is sponsored by LCCC's Student Life and Dining Services. Faculty and staff at the school donated beverages and desserts, and also have volunteered to help at this evening's dinner, which will be served at the school.

When it comes down to it, schools aren't just providing an education anymore--they are also teaching students how to take care of others and to be conscious of people's needs during the holidays.