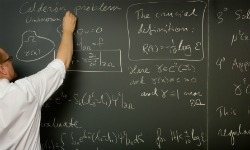 Some colleges and universities are making efforts to persuade students to consider majoring in the so-called STEM fields--science, technology, engineering and math.

STEM majors tend to have excellent career prospects. For example, when TIME reported this year on the ten highest-earning majors, eight were in engineering, one was in math and computer science, and one was in pharmacy and pharmaceutical sciences and administration. On the top of the list of majors was mining and mineral engineering, earning $80,000 annually.

Moreover, according to The Wall Street Journal, research has shown that graduating with a STEM major also helps those entering professions in business, finance, and most healthcare professions.

Nevertheless, the poor job market has apparently not convinced students to choose these majors. The Wall Street Journal noted that according to the most recent statistics from the U.S. Department of Education, students graduating with engineering degrees only increased 19 percent between 2001 and 2009, even though the number of college graduates rose approximately 29 percent. Meanwhile, the number of those who graduated with computer and information sciences degrees fell 14 percent.

Education experts have said that part of the problem is that such fields are more difficult and time consuming. "It's just hard," said Edgard Barbossa, a student at Florida Atlantic University who was quoted by The Tampa Tribune. "If you're going to take these classes, you need to have a good reason." He said that Florida should do more to inform people about the jobs available in technical fields.

Officials are doing their best to address the problem. The Tampa Tribune reported that the state university system's Board of Governors made several suggestions to encourage STEM majors. For example, they proposed charging lower tuition for STEM degrees and creating a scholarship specifically for students majoring in those fields.

In addition, The Wall Street Journal reported that some institutions have tried to make engineering more accessible. At Georgia Institute of Technology, for example, introductory computer science is split into three separate courses: one for computer science majors, another for engineering majors, and the third for liberal arts, architecture and management majors. The latter course focuses more on practical tasks such as using programming to manipulate photos. As a result, about 85 percent of students pass.

Experts point out, however, that students should not choose to major in STEM fields for career prospects alone. "If you major in something you don't enjoy," noted Lesley Mitler, president of Priority Candidates Inc., who was interviewed by U.S. News & World Report, you're not going to excel at it."