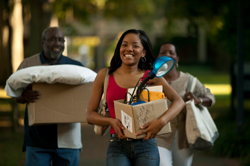 In recent years, colleges have struggled with parents who micromanage every aspect of their teen's life. These so-called "helicopter parents" have trouble letting go of their teen and are often quick to confront a teacher, coach or counselor for "unfair" treatment. While these parents just want to protect their child, the approach does not help teens develop decision-making skills, said retired high school counselor Rich Barbera to CNN. Therefore, in an effort to teach doting parents how to let go and allow incoming freshmen to become independent, more colleges are implementing departure ceremonies or parent-only orientation sessions during college move-in days, reported The New York Times.

According to the Los Angeles Times, 97 percent of U.S. and Canadian colleges and universities held orientations for parents of incoming students in 2009. In comparison, only 61 percent of the 500 schools surveyed said they held parent orientations in 2003. These new workshops inform parents on health insurance, dorm life, financial aid, academics, alcohol abuse, policing and other details of university life. More importantly, these activities are intended to help ease the pain of separation and discourage intrusive habits.

Parent orientations and departure ceremonies have become increasingly popular as technology, such as Skype and text messaging, has allowed parents to stay overly connected with their teen. Furthermore, rising tuition may also be increasing parental anxiety. "A lot of parents are paying big tabs, and they want to have a more active involvement in where their money is going," said Craig Mack, president of the National Orientation Directors Association.

According to The New York Times, most schools have opted for not-so-subtle hints to urge parents to head home. At Princeton, for example, move-in schedules note that as of 5:30pm "subsequent orientation events are intended for students only". At the University of Minnesota, mothers and fathers are invited to a reception so that students can meet with their roommates and discuss room space without their parents interfering. The Los Angeles Times added that at the University of Southern California, orientation director, Thomas Studdert, told parents of new college students, "Life is going to change for both the student and parents...It's no longer being a parent of a child, it's being parent of an adult."

CNN pointed out that it is important to acknowledge that difference as hovering can have negative outcomes. "If a parent becomes so enmeshed in the child's life that they can't let go, it becomes embarrassing for the child," said Dr. Ken Haller, associate professor of pediatrics at Saint Louis University School of Medicine. He also added that parents need to set an example of how kids should deal with powerful people. "If you go in and try to bully them, you give the kid the message that the only way you'll get things is to be confrontational and adversarial," he explained.

So far, parent orientations seem to be helpful. Ron Eastwood, whose only child Sara is starting at the University of Los Angeles next month told the Los Angeles Times that parent orientations are teaching protective parents how to "keep our helicopters on the ground more often". Elizabeth Warren, also a parent of a soon-to-be UCLA freshman agreed. "This whole process puts it all in perspective and relieves a lot of the anxiety we feel as parents," she said.