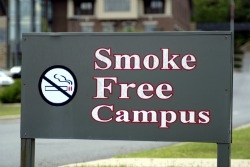 The University of California, Los Angeles is the latest college to institute a tobacco-free campus policy that should put an end to the use of products like cigarettes, cigars, chewing tobacco and even electronic cigarettes on campus, according to the Los Angeles Times. The ban, expected to start April 22, 2013, will help create a healthy environment for students, faculty, staff, patients and visitors and to decrease the amount of litter that non-biodegradable cigarette butts create.

"It is important to protect our community from these serious health risks and adverse environmental effects," wrote UCLA Chancellor Gene D. Block in a letter quoted by the Los Angeles Times.

The ban is part of an overarching UC initiative to prohibit use of tobacco products on all of its campuses by 2014. Policies are expected to be implemented in a broad number of ways but education will be the main focus. At UCLA, for example, smokers will be provided with access to resources to help them quit, according to Block.

"Becoming tobacco-free is integral to our ultimate goal of becoming the healthiest college campus in the country," he wrote.

Research has show that fewer people smoke and are exposed to related risks when a tobacco-free environment is created, Robert McMillen, project director of the National Social Climate Survey of Tobacco Control, told The Reflector. Fewer tobacco products are also used. Such results also held true in a recent study, published in "Preventive Medicine," that revealed that a tobacco-free campus policy at Indiana University decreased student tobacco consumption and altered the social norms.

More than 700 schools already have instituted no-smoke or no-tobacco policies, according to statements made by Bill Kibler, Mississippi State University's president of student affairs, in The Reflector. At MSU, a policy to transition to a tobacco-free campus by the fall of 2014 is under discussion.

"If someone wants to smoke a cigarette on campus, the only exception would be if they smoked in their own personal vehicle," Kibler said in The Reflector.

Yet, some colleges have had difficulty implementing a total ban. The University of Nevada, Las Vegas, which was given a $450,000 federal grant to develop a tobacco-free campus policy (Tobacco Free UNLV) by the spring 2012, failed to do so, according to The Rebel Yell. Some of the backlash was that the ban was too restrictive and fell to quickly on the heels of a similarly-passed state law. As a result, smoking was banned around four buildings on campus. However, a new group of students, The Student Tobacco Awareness Coalition, has now taken up the cause and has a sole aim of educating students and faculty about the dangers of tobacco use.

"It's possible to still have a grassroots movement of students that are supportive of an idea to go forward and to continue to debate and argue the issue," said Kristin Guthrie, a leading advocate for the coalition, in The Rebel Yell. "Whether [you're] in support of [tobacco use] or against it, let's continue the conversation."