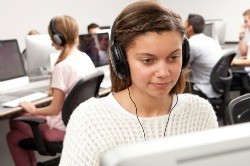 Last month, Google announced a $50 million initiative called Made with Code. The goal: To attract more young girls to coding, bridging a growing gender divide in the technology sector. In a column she penned for Forbes, Northwestern University junior Yunita Ong applauded the effort but suggested it would do little to boost the ranks of women studying computer science in the near term. Colleges, she said, should do more to attract undergraduates to the field right now.

Women have long been underrepresented in the computer sciences, and according to recent data, the problem is only getting worse. The National Center for Women & Information Technology, a partner in Made with Code, reported that 18 percent of computer science or engineering graduates from 2012 are women. In 1985, that share was 37 percent. There are a number of factors that may be at play, noted The New York Times. For instance, some women feel like outsiders in a male-dominated field, while others feel they have fewer mentors to help them succeed. Kate Parker, a spokeswoman for Made with Code, told Newsweek that she hopes the group's efforts will "address the urgent issue of gender inequality in field." In her Forbes column, Ong wrote that while initiatives such as Made with Code may help boost the share of women participating in computer science down the line, results are unlikely to be immediate. She said colleges could be doing more to attract women now.

Ong may be on to something: According to The New York Times, many colleges have already begun adopting new methods for attracting more women to computer science. The University of Washington and Carnegie Mellon have hosted camps and mentoring sessions for young adults interested in the field, including a number of women. Carnegie Mellon also eliminated programming experience as an admissions requirement, opening the door for girls who may not have been exposed to it in high school. Harvey Mudd, a small, prestigious California college, hired more female campus tour guides and made a conscious effort to feature more women in computer science brochures and other materials. The goal is to normalize women in tech.

"We made it very clear that being a female scientist, that's normal," Maria Klawe, president of Harvey Mudd, said at the recent Fortune Brainstorm Tech conference, as reported by The New York Times.

If the data is any indication, these efforts are working. Forty percent of incoming freshman to Carnegie Mellon University's School of Computer Science are women -- the largest group ever. Forty percent of Harvey Mudd's computer science majors are also women, and this year, women represented over half of the school's engineering graduates for the first time ever. Meanwhile, at the University of Washington, women earned 30 percent of computer science degrees this year -- well above the national average.

Lenore Blum, a computer science professor at Carnegie Mellon, told The New York Times that she believes other schools could make similar changes, and with similar success.

"I don't think we're doing anything that nobody else could do," said Blum, "but it has to be sustained and institutionalized."

It remains unclear whether the success some colleges have had in recruiting more women into computer science will follow through to the workforce. Newsweek reported that major tech giants like Google have come under fire for hiring a disproportionate number of male programmers, often coined "brogrammers." Still, The New York Times suggested it is a good start. Companies cannot hire more women, after all, until more women learn how to code -- and that all begins in college.

"Google's Helping Young Girls, But How Can We Get Wome in College To Code?" forbes.com, July 1, 2014, Yunita Ong, http://www.forbes.com/sites/yunitaong/2014/07/01/googles-helping-young-girls-but-how-can-we-get-women-in-college-to-code/