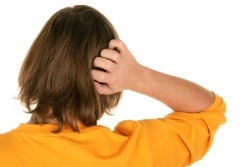 A number of campuses are feeling a little itchier these days.

At Huntington University in northeast Indiana, officials said that students in four of the college's eight residence halls have head lice, which were believed to have been contracted on a mission trip to India.

"We've screened a lot of students at this point," said Ron Coffey, the school's vice president for student life, who was quoted by The Journal Gazette. "And they have all received shampoos and treatment that they're undertaking."

Head lice are tiny insects that can be found on the head and neck, which can easily spread by contact. Lice can cause intense itching of the scalp and red bumps on the head.

Other colleges are scratching as well, although not because of lice: At the University of Nebraska at Lincoln, bedbugs have been discovered in 94 residence hall rooms. As Inside Higher Ed reported, Nebraska's housing website now has a blog about the bedbug situation with daily updates. According to university spokeswoman Kelly Bartling, treating each dorm room costs $1,000, plus $800-$900 to pay for each dog that can detect the bedbugs. In all, the bedbug breakout has cost the university over $150,000, and about 75 percent of the dorm rooms have yet to be inspected.

Meanwhile, the World-Herald News Service reported that the University of Nebraska at Kearney became the third Nebraska campus over the weekend to report a bedbug infestation. This one, however, appears to be limited to one room.

"Unless you live in a bubble, sometime you or someone you know is going to have to deal with bedbugs," said Rich Garrey, a housing facilities official with Iowa State University in Ames, who was quoted by the World-Herald News Service. "The thing is, they don't know the difference between a ditch or the penthouse in Trump Palace."

According to Jeffrey White, an entomologist who serves as technical director for the online Bedbug Central, such outbreaks are common on college campuses.

"College and university dorms are really long-term-stay hotels," he told the World-Herald News Service. "The trick is limiting the spread in a dorm building. You have a lot of socialization among students in a dorm. If you don't catch things quick enough, you have a sort of spiderweb effect."

According to UNL, other universities have reported bedbug outbreaks in the past five years, including Stanford University, Penn State University, Texas A&M, Ohio State, Illinois and Yale. The World-Herald News Service also noted that last week, bedbugs were reported in two dormitory rooms at Chadron State College in Nebraska.