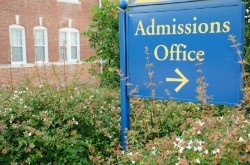 Many colleges claim to judge students' eligibility for admission on their academic and personal qualifications alone. But according to a survey released Wednesday, a sizable proportion of admissions directors say that students who can pay full tuition are among their top recruitment targets.

"The findings, drawn from responses from 462 top admissions officials at a range of nonprofit colleges and universities, are in many ways consistent with concerns many of them have been raising about the pressures being placed on them to fill classes that make sense economically, not just educationally," writes Inside Higher Ed editor Scott Jaschik, a co-author of the 2011 Survey of College and University Admissions Directors.

The survey found that recruiting more "full-pay" students, or those who receive no financial aid, is a "key goal" at four-year public schools, coming ahead of providing aid to low- and middle-income students. Tactics include increased outreach and looser academic standards: At 10 percent of four-year colleges, admission officials indicated that the full-pay college students who are admitted often have lower grades and test scores than others.

At two-year community colleges, recruiting full-pay students is also a concern. One-third (34 percent) of admissions counselors called it "an important strategy." However, two-thirds (66 percent) of the community colleges reported that their primary focus remains on helping students with limited financial resources.

Among four-year colleges overall, the most important admission strategy cited is to recruit larger numbers of out-of-state students (37.6 percent), who typically pay higher tuition than residents.

Admissions directors are also seeking out more international students, another group paying higher tuition rates. One-fifth (22 percent) reported using commission-based agents to recruit these students, a practice considered unethical. Almost half (47 percent) said they believed these agents help their clients falsify their applications, including having admissions essays written by others.

Also, about one-quarter (28 percent) of admissions directors reported receiving outside pressure, from senior-level administrators, trustees or development officials, to admit certain students regardless of their qualifications.

"Whether it's fair or not to admit less-qualified applicants is a different issue, and whether doing so will ultimately damage the university's reputation and value in the marketplace remains to be seen," Daniel de Vise, TIME Moneyland reporter, wrote in his higher education blog.