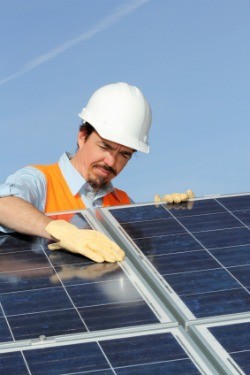 More than a half-dozen colleges and universities are taking part in a federally-backed initiative focused on improving energy efficiency in specific buildings by at least 20 percent.

"Upgrading the energy efficiency of America's buildings is one of the fastest, easiest and cheapest ways to save money, cut down on harmful pollution and create good jobs right now," Obama was quoted in a White House press release as saying.

Companies like 3M, Alcoa, CB Richard Ellis, GE, Kohl's Department Stores, and many more are expected to participate, according to the White House. Many schools partaking in the initiative have already taken steps toward improved energy efficiency and will continue to do so. Lorris Betz, interim president of the University of Utah, expressed pride at being part of the program, reported Newswise.

"The entire university community can be proud to be counted among this select group of institutions that are leading the way to more efficient and environmentally-sound ways of operation," Betz was quoted as saying.

Plans at the school include retrofitting a 1970s architecture building to be net zero in energy production and use instead of ripping it down and erecting an entirely new structure.

"There are thousands of buildings like ours in the U.S. and we hope the visibility and support from the Better Buildings Challenge will provide a model for the entire country," Brenda Scheer, dean of the school's College of Architecture and Planning, said in Newswise.

The $4 billion package introduced by Obama as well as former President Bill Clinton on Friday looks to increase job vitalization through green-energy upgrades to buildings across the U.S. Half of the money is to come from the federal government through savings made by these changes while the other half is to come from private industry, hospitals, postsecondary education sites and more in their upgrades to related buildings, according to the press release.

In fact, officials at Michigan State University are already planning various ways to modify energy usage, according to a MSU press release. Changes include adding energy monitor systems into two residence halls, installing occupation sensors to turn off lights in the classroom, and using geothermal energy in a new addition at the life sciences building.

Lou Anna Simon, Michigan State University's President, was in Washington D.C. on Friday with about 50 other officials listening to the announcement by Obama and partaking in the related event, hosted by U.S. Secretary of Energy Steven Chu. She indicated her school is prepared to move forward on its commitment.

"We are ready to accept the challenge of improving the energy efficiency of our main campus buildings, about 20 million square feet of building space, targeting the energy reduction goal of this initiative," she said in the press release.

"U of U Joins White House Initiative to Boost Energy Efficiency," newswise.com, December 2, 2011