Colleges Woo Prospective Students, And Their Parents, As May 1 Deadline Approaches 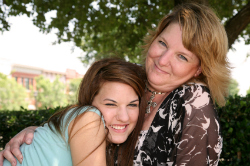 With the May 1 commitment deadline just weeks away, many universities are stepping up recruiting efforts to woo admitted students.

In an interesting reversal of roles, colleges and universities are bombarding students with emails, party invitations and chat room requests, reported the Los Angeles Times. These more aggressive tactics are a result of recession-linked money worries as well as a new trend of students applying on average to more schools than previous generations.

"For months and months, colleges, USC included, have left your waiting to know if you were going to be admitted," said University of Southern California dean Timothy Brunold during a students and relatives lunch reception. "Now, believe me, we are counting the days until we find out if you are going to choose us."

Although students applied and were admitted to more schools, the percentage of admits who actually enroll has dropped in the last decade--43 percent from 48 percent at public universities and 35 percent from 40 percent at private, not-for-profit schools.

So in an effort to boost enrollment, universities are spending more and doing more. For example, many schools are expanding their social media efforts by creating Facebook pages were students can build friendships online before starting classes. Colleges hope that this will create a sense of community that will lead to enrollment. Some schools are hosting more events and receptions on campus and across the country to reel in admitted students. The University of California Santa Barbara, for instance, is holding out-of-state receptions for the first time to attract out-of-state students who pay higher tuition.

According to The Washington Post, colleges are also starting to target parents of prospective students.

"It used to be that parents were just along for the ride, but this is a generation that feels like parents are partners," said Sharon Alston, executive director of enrollment at American University.

Indeed, for many students, picking a school is now a family decision and parents want to play a more active role than just writing a tuition check. Furthermore, with parents more digitally attached to their children, college officials are learning that it takes more than communication with prospective students to get them to enroll.

At Marymount University, for instance, officials send parents postcards throughout the year, invite them to parent-only events and publishes a "Guide for Parents". During this spring's admission season, many colleges held parent-only receptions, targeted parents on their websites and some even addressed financial aid letters "To the parents of..."

However, according to The Washington Post's Campus Overload, the involvement doesn't stop at parents--grandparents also have more say in the decision-making process as they often pay for a portion of tuition or foot the bill for extracurricular activities such as study abroad or fraternity dues. Furthermore, many colleges hold "family weekend", instead of "parents weekend", so that grandparents and other relatives feel welcome.

While some students--and parents--may enjoy being wooed, such efforts may not always work, noted the Los Angeles Times.

Andre Cousineau, a senior at Eagle Rock High, said the emails and invitations he's received from the nine schools that admitted him haven't changed his mind. Cousineau said what's important to him are financial aid and costs at his top four picks. Another factor in his decision is where he can play competitive soccer.

"It's a really tough decision. The financial aid package is important, but you have to look at other opportunities as well," he said.

"It's not just helicopter parents--grandparents want to check out campus life, too," washingtonpost.com, April 11, 2011, Jenna Johnson