Colleges Worry About Increasing Illegal Use Of 'Study Drugs' 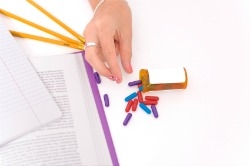 In light of soaring use of prescription medications to treat attention deficit hyperactivity disorder, or ADHD, college administrators are now worried that illegal use of these drugs by students is on the rise. They are also grappling with the question of whether their use constitutes academic cheating.

Study drugs are "kind of a silent issue," Daniel Swinton, president of the Association for Student Conduct Administration and assistant dean at Vanderbilt University, told The Washington Post. "Everyone's aware of it, but I think we're all focused on the more prevalent one--alcohol."

Medications such as Adderall, Ritalin and Vyvanse are psychostimulants that increase mental acuity and allow people with ADHD to concentrate, reported The Battalion. Students without ADHD, however, use these drugs to stay awake and focus intently on studying, often obtaining or buying them from friends with legitimate prescriptions.

During this current fall semester, Duke University went so far as to announce that the unauthorized use of prescription medication was cheating and consequently updated its Duke Community Standard to reflect that, reported The Daily Tar Heel. According to The Washington Post, the White House Office of Drug Control also recently addressed concern about increased use of study drugs in its 2011 strategy report, which outlines goals for reducing drug use by 2015.

Debate exists, however, whether these study aids give students an academic edge and if their use is academically unethical, The Battalion pointed out. Even if colleges and universities like Duke prohibit unauthorized use of pharmaceutical stimulants, they run into difficulty enforcing such a rule. Use of these study aids is hard to spot.

When students are caught illegally using prescription drugs to study, it's often from investigation of other infractions, such as traffic violations. According to a Washington Post analysis of data from local schools, a major university responds to just a handful of illegal prescription stimulant complaints during an average school year. This compares to hundreds of alcohol-related incidents and dozens involving street drugs. Of the nearly 1,400 drug-related cases during the previous two school years at more than 10 major colleges in the Washington area, about 36 involved prescription drugs, primarily ADHD medications.

At Duke University, students discovered to have these drugs without a prescription, or to distribute them, face legal repercussions and perhaps even expulsion from their school, depending upon policy, The Daily Tar Heel noted.

Perhaps most alarming is the potential side effects students could suffer from abusing these stimulants. Adderall, for instance, releases dopamine, which plays a major role in addiction. It also could exacerbate predispositions for mental illness such as psychosis and anxiety.

"It's risky," Allen O'Barr, director of counseling and wellness services at the University of North Carolina, Chapel Hill Campus Health Services, said in The Daily Tar Heel. "It is monkeying around with the brain's chemicals."