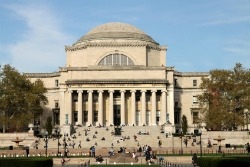 According to The Wall Street Journal, the institution is asking applicants to respond to the question, "What is your post-M.B.A. professional goal?". However, instead of a lengthy drawn-out response, admissions officers are only allowing students to use 200 characters, 60 characters more than the maximum length of a tweet.

The idea is to steer students away from the strategically crafted responses that often result when applicants work with a professional M.B.A. admissions consultant towards a more authentic and honest response.

The University of Iowa's Tippie School of Management added a similar requirement to its application process earlier this summer, reported Poets & Quants. There, applicants were required to tweet what would make them "an exceptional Tippie Full-time M.B.A. candidate and future M.B.A. hire?". The school also made a contest out of it and, according to The Wall Street Journal, the winner--whose tweet was a haiku--was awarded a full scholarship valued at $37,240.

GOOD pointed out that schools may also be turning to tweet-style responses because admissions officers simply do not have time to read through lengthy essays. The Common Application, which is part of the undergraduate application process at more than 400 colleges and universities, for instance, recently capped its essays at 500 words.

According to The Wall Street Journal, business schools are trying other new things as well, in hopes that students will produce more honest responses. University of California, Berkeley's Haas School of Business applicants were asked what gives them the greatest joy instead of the usual question, "What are you most passionate about?". The school hopes the question will give admissions officers more insight into what applicants are really excited about.

"There are many [applicants] who still think there is a formula to get into business school, who think there's a certain type of response the admission people want to see," explained Stephanie Fujii, executive director of full-time M.B.A. admissions at Haas. Fujii pointed out that there isn't.

Harvard Business School applicants will be given a more open-ended prompt: "Answer a question you wish we'd asked". And at the University of Pennsylvania's Wharton School, M.B.A. applicants will be invited to participate in an on-campus group discussion with fellow applicants. The discussion will be moderated by staff and topics will be chosen by the school.

Director of M.B.A. admissions and financial aid at Wharton Ankur Kumar explained that it gives applicants "a chance to demonstrate, not just talk about" their critical thinking skills and interests.

But some schools are sticking with tradition. Stanford Graduate School of Business, for example, is still asking applicants, "What matters to you most, and why?". The question has been part of the school's essay section for nearly two decades.