Common Core Elicits Both Praise and Criticism From Parents and Educators 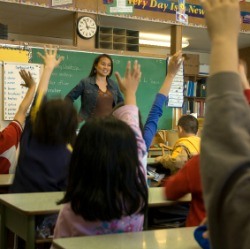 The Common Core, a set of new national K-12 educational standards that have been adopted by 45 states and 4 territories, has sparked both praise and criticism amongst educators, students, and parents. Developed by the National Governors Association Center for Best Practices and the Council of Chief State School Officers in partnership with teachers, parents, and local leaders, these standards aim to encourage conceptual understanding, critical thinking, and academic challenges in the classroom. On its website, the Common Core Standards Initiative describes its mission: "The Common Core State Standards provide a consistent, clear understanding of what students are expected to learn […and] are designed to be robust and relevant to the real world, reflecting the knowledge and skills that our young people need for success in college and careers."

States that have agreed to adopt the Common Core Standards generally must implement these standards between 2013 and 2015. As a result, school districts throughout the nation are working to develop lesson plans, train teachers, and test students in order to bring their schools' curricula in alignment with the new guidelines. Some educators have found the new standards to be beneficial. For example, The Orange County Register reported that, of the 720 kindergarten and elementary school teachers in Santa Ana that have begun implementing the standards into their lesson plans and practices, 92 percent said that the Common Core ranged from effective to very effective. Similarly, according to 3KRTV, elementary school students in Great Falls, Montana are now being asked to explain their answers in math class in such a way as to reflect conceptual understanding. First grade teacher Debbie Clapshaw said of her students' learning under this new program, "They're having a better, deeper understanding of the math concepts before moving on to the harder skills."

Still, many people also have negative reviews of the effects the Common Core has had on schools. Award-winning New York State educator and principal Carol Burris wrote about her strong concerns in a piece that was posted on The Washington Post. "When I first read about the common Core State Standards, I cheered," Burris stated, explaining her initial support of the Common Core for its promises to ensure relevance and rigor across the nation's school districts.

"I confess that I was naïve," she continued, "I should have known in an age in which standardized tests direct teaching and learning, that the standards themselves would quickly become operationalized by tests. Testing, coupled with the evaluation of teachers by scores, is driving its implementation." Buriss's main concern is the fact that evaluating schools' adherence to the Common Core through standardized tests inevitably forces many teachers to neglect untested subjects while drilling students on other subjects in such a way that promotes memorization and stress rather than critical thinking.

Other people agree, including college professor Mark Rice, who wrote a piece for The Huffington Post criticizing the fact that many of the Common Core curricular materials are just not suitable for the grade levels to which they are assigned. "I don't just mean things like the worksheet that included a rectangle divided into six sections with written instructions asking students to shade one-fifth of it," he wrote. More problematic, he believes, are the exercises like the one that brought his eight-year-old daughter to tears by asking her to explain why half a brownie might amount to more brownie than an eighth of a brownie. "How in the world is that problem supposed to help a third-grader learn fractions?" Rice asked readers, "Third-graders are concrete thinkers and they are just learning the basics of fractions. Why throw in a poorly-written word problem that asks them to explain an abstract concept such as the idea that one-eighth of a larger whole may be bigger than one-half of a smaller whole?"

As the Common Core standards and their implementation are still young, the full effects of this nationwide shift, whether positive or negative, have yet to unfold. Nevertheless, parents, teachers, and administrators will likely remain very vocal about the Common Core-related challenges and triumphs they may encounter in the coming years.