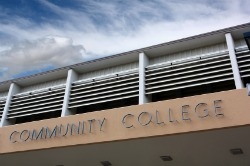 After years of record enrollment, many community colleges are seeing a decline in growth this year, and officials have various theories as to the cause.

"We're hearing that from at least a quarter of the schools, maybe as many as a third," said Michael Hansen, president of the Michigan Community College Association, who was quoted by the Grand Rapids Press. "There are a number of reasons. But when you consider that the colleges have seen record enrollment for the past five years or so, the number of people attending is still a very high number."

Some Michigan community college leaders are attributing the decline in enrollment to a reduction in funds available for job training, or possibly a decreased number of high school students.

In Illinois, where community colleges are seeing the same trend, officials have other ideas about the cause. "We're not sure what's going on exactly," admitted Evelyn Schiele, spokeswoman for the College of Lake County, who was interviewed by the Daily Herald. "There are some theories on the table."

Some officials feel that people simply have less time for classes since they can't afford to be out of work. As a result, people continue to work at jobs for which they are overqualified because they have no money to pay tuition for additional training.

"Community colleges continue to be the best value in town," noted Jim Bente, vice president of planning and institutional effectiveness at the College of Du Page, who was quoted by the Daily Herald. "But if it's the difference between paying an electricity bill and taking classes, people have to prioritize."

Illinois' community college board reported that the spring 2011 statewide head count was 381,582--a drop of 2 percent from 389,432 in spring 2010. At least some community college officials have considered whether rising tuition costs have played a part. At seven Illinois community schools, for example, credit hours cost at least $15 more this fall compared to 2006.

"Tuition has gone up a bit," acknowledged Schiele, "so we're asking, have we hit a price point?"

That's precisely what California community college officials believe. At the College of Marin, for example, enrollment dropped by about 400 students this fall, just as enrollment fees jumped from $26 to $36 per unit as a result of state cuts to education.

"I do think enrollment fees have had a historical effect on enrollment at community colleges," said College of Marin spokeswoman Cathy Summa-Wolfe, who was quoted by the Marin Independent Journal. "Even though we have more students applying for--and receiving--either waivers or financial aid, fees do affect enrollment."