Community College Students Find It Difficult To Get Classes 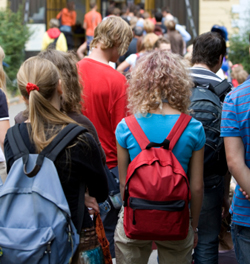 With higher enrollment rates and severe budget cuts at community colleges, more and more students are having difficulty enrolling in the classes they need.

According to a press release, a recent survey conducted by Harris Interactive interviewed 1,434 U.S. community college students between the ages of 18 and 59 and revealed that 32 percent of students were unable to enroll in a class of their choice because the course was already full. Furthermore, an astonishing 55 percent of Hispanic students reported being unable to enroll in a class.

Inside Higher Ed reported that 22 percent of community college students who needed to enroll in remedial courses experienced difficulty doing so. Almost 30 percent of students who took English or mathematics placement tests could not enroll in their recommended classes in the fall 2010 semester.

Impacted classes also forced many students to enroll in fewer classes than they had planned. On average, students intended to take 3.3 courses, but in the end were only able to enroll in 2.9 courses.

Furthermore, even if students were able to successfully enroll in the classes they needed, most expressed frustration with the difficulty they encountered.

"You used to be able to wait until the last moment. But it's getting to where you have to go online at three in the morning to get a spot in some classes," said Miguel Morales, a 43-year-old part-time student at Johnson County Community College. Morales tried to enroll in intermediate algebra this spring, but failed to get a seat.

As The Chronicle of Higher Education pointed out, many state community college directors predict that state funding will only continue to decline while enrollment rises. The Wall Street Journal agreed, noting that community colleges depend on state contributions in order to keep tuition low for students. However, in the current economy, many states are trying to limit spending, particularly in cash-strapped states. Budget cuts in California, for instance, may force its community colleges to turn away some 350,000 applicants next year.

"It's disturbing," said Thomas Bailey, director of the Community College Research Center at Columbia University. However, he added that given the cost constraints, "community colleges need to figure out some way of limiting their enrollment."

Many community colleges are implementing new ways to keep up with the increase in enrollment. Some schools have added midnight classes to meet the increasing demand, while others have started waiting lists. City University of New York (CUNY) colleges have even created a one-month winter semester specifically for core classes. However, some students feel it is still not enough. According to the press release, 44 percent of community college students wanted the option to take all their courses online.

Although accessibility remains a top priority for many community colleges, according to Bailey, some schools may establish an academic criterion for admission, reported The Wall Street Journal.

"They're saying, 'Maybe we should set a floor--a certain level of skills you need to have'" to gain admittance.