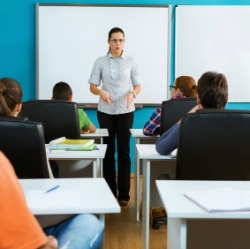 On the surface, online classes and community colleges might seem like a match made in heaven, since two-year students are more likely to work full time or have family obligations to tend to. Yet according to a new study from Columbia University's Community College Research Center, most of these students still prefer face-to-face instruction -- at least in subjects they deem difficult, interesting or important.

According to the Chronicle of Higher Education, the research, funded by the Bill & Melinda Gates Foundation, aimed to discern why some students choose to take some courses online while others opt for physical classrooms. It comes at a time when most two-year schools host -- and are even expanding -- online courses.

"Because they serve a lot of students who work and have kids, community colleges feel they need to offer more and more online courses to meet their demands," report author and CCRC assistant director Shanna Smith Jaggars told the Chronicle. "But we looked at, What is the extent of that demand?"

According to the Los Angeles Times, only 10 percent of study participants said they would prefer to take all their courses online -- mainly students whose schedules demand flexibility and older students who would prefer not to interact with younger classmates. The remaining 90 percent of participants said they would prefer a mix of online and face-to-face instruction, especially in difficult courses or those that require a lot of back-and-forth discussion with peers or instructors.

"It just seems more, when you do it online, if you need help, your teacher is basically not there," said one participant, as reported by the Los Angeles Times. "Like face-to-face, she can help you a little bit more. But then when it comes to online, you have to teach yourself, I guess you could say."

In actuality, a 2010 study from the U.S. Department of Education found that online students in fact fared better than classroom-based learners. Christine Mullins, executive director of the Instructional Technology Council, told The Chronicle of Higher Education that online students' ability to study at their own pace and review course content probably helped. She also said that many online courses do encourage peer interaction through email or chat rooms.

Inside Higher Ed reports that the new CCRC study's results are based on interviews with 46 students taking online courses at one of two unnamed Virginia community colleges. Though Jaggers said participants were "fairly representative of the typical student who takes online courses," Russell Poulin, deputy director for research and analysis at the WICHE Cooperative for Educational Technologies, cautioned against drawing too many conclusions from the study, given its size. He noted that the results reinforce the idea that community colleges need to add online options strategically, especially when budgets are tight.