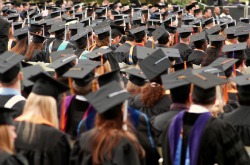 In light of President Obama's efforts to improve American higher education, officials announced that community colleges will receive more than $2 billion from a much anticipated federal grant program.

The $2 billion program, called the Trade Adjustment Assistance Community College and Career Training Grants Program, seeks to not only improve the nation's struggling economy but also meet college-going and degree-completion goals, The Chronicle of Higher Education reported. Specifically, the grant program will allow community colleges to create, expand and restructure job-training programs. Moreover, it will reward projects that seek ways to boost the economy through new education and training programs that meet the needs of local or regional businesses.

President Obama has made it an educational priority to provide every American with at least one year of postsecondary education and aspires to have the highest proportion of college graduates in the world by 2020. Over the next year, the US Department of Labor and the US Education Department will award about $500 million to two-year American colleges. A total of $2 billion will be allocated over the next four years.

In 2009, President Obama proposed a major grant program for community colleges, laying out a $12 billion plan, called the American Graduation Initiative. The plan, however, fell through during the legislative process.

Although community college officials were initially disappointed with the collapse of the more ambitious grant program, many are grateful that the federal government is following through with its promises to attend to their financial needs.

"The grant solicitation reflects an appreciation of the ways that community colleges are reexamining and refining their methods of providing cutting-edge education and training," said David S. Baime, senior vice president for government relations at the American Association of Community Colleges.

In addition, the grant program might lead to a significant investment in online education. The Labor and Education Departments have proposed creating openly available online courses, furthering government support for the growing movement to publish learning materials free on the Internet.

According to The Badger-Herald, individual colleges can earn as much as $2.5 to $5 million dollars in grants. Overall, the purpose of providing these funds to community colleges is to improve the ability of Americans to achieve higher level degrees, certificates and credentials to better their chances of employment, said Sarah Gast, spokesperson for the US Department of Education.

"Everyone, especially the trade-impacted workers who are the focus of this program, deserves access to the level of education necessary to obtain employment that can support a family," Secretary of Labor Hilda L. Solis said in a press release. "These grants will help colleges create programs that make it possible for workers to come back to school and acquire skills and industry-recognized credentials needed to compete for good jobs in growing industries."