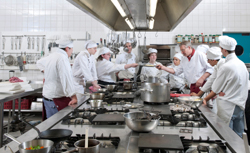 More and more community colleges are upgrading their hospitality and culinary programs--or creating new ones--to keep up with a growing demand within the industry, reported Inside Higher Ed.

With the influence of popular networks, such as the Food Network and the Travel Channel, the hospitality and culinary industry has become a popular career field. Currently, the industry employs more than 12 million people, or approximately nine percent of the country's workforce, and according to the U.S. Department of Labor, it is expected to grow by at least 15 percent in the next decade.

Typically, training hotels are only found at four-year institutions. However, to keep up with new demands and to keep a competitive edge, some community colleges are beginning to expand. Kirkwood Community College, for example, opened its first fully functioning training hotel on its campus last month. The Hotel at Kirkwood Center has 71 rooms, a gourmet restaurant and lots of traditional learning spaces--two culinary labs, a bakery lab, auditorium, five classrooms and a computer lab. A professional staff manages the hotel, but the school's 300 hospitality and culinary arts students provide additional help. As a result, students can gain hands-on experience in every position from housekeeper to line chef.

According to Inside Higher Ed, the training hotel allows Kirkwood to give its students a "learning-by-doing" experience. "They'll work next to employees at our hotel after having gotten the book smarts and then apply it right there. All students will work shifts at the front desk, as a valet, as a bell captain, as housekeeping and laundry staff," explained Mary Jane German, chair of the hospitality arts department.

Students were both shocked and excited about the new facility. "It's like nothing we'd ever expected," said Andrew Irwin, a culinary arts student who enrolled last year before knowing that the hotel was under construction. "I mean, this is a real restaurant, not just something we set up in the common area in a building on campus. Like last semester, we used to sell food we'd prepared to students outside the campus cafe."

Kirkwood is not the only community college enhancing its learning environment. The Miami Herald reported that Miami Dade College will debut its Culinary Institute in January. The eight-story building at the Wolfson Campus will have a full-service professionally run restaurant, wine-and-food demonstration studio and organic food lab. Students will learn cooking and business skills to prepare them for entry-level positions at half the cost of private culinary schools.

In addition, eight local chefs will help create the curriculum and will eventually evaluate the graduates. Organizers told the Miami Herald that the idea is to give students a direct path from the institute to some of South Florida's hottest kitchens. "When kids finish college and finish the university, we want those kids employed here. And we further want to have the businesses here feel like they have an educated population, a work force that is ready and that doesn't need additional training," explained Al West, chief financial officer with the Greater Miami Convention & Visitors Bureau.

Cuyahoga Community College also announced its new Hospitality Management Center (HMC). Students will train for careers in a state-of-the-art 25,000 square foot facility. The HMC will also partner with downtown Cleveland hotels and restaurants to give current hospitality industry workers an opportunity to advance their skills.

The HMC also offers accelerated business programs as well as online and evening courses. In 2011, the school plans to open an onsite restaurant.

Brad Scott, chair of the culinary arts and hospitality management department at Scott Community College told Inside Higher Ed that "there are some things you just can't teach in the lab environment. You need to get in the weeds. You need to be somewhere night after night to get good". Campus training hotels and restaurants will better prepare students for the real deal after graduating.